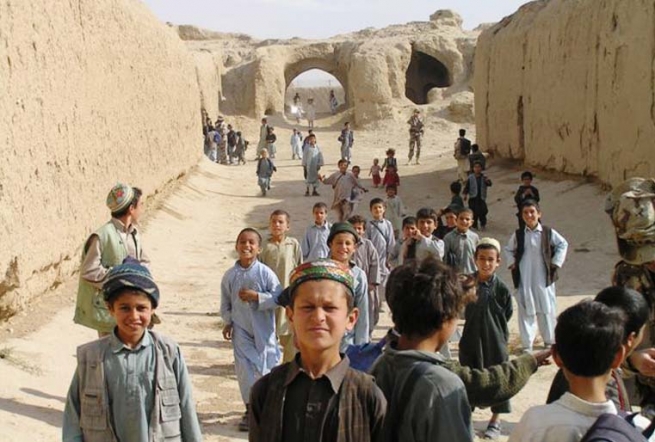 (MissionNewswire) Saidi, a 14-year-old Afghan, is attending the Don Bosco Institute of Tournai. He is one of five refugee boys attending the school and receiving shelter, education and support services.  In Belgium, like in many countries across Europe, Salesian missionaries have been assisting young refugees with programs that help them to integrate into their new communities.

Saidi escaped from the Taliban in Kabul and was welcomed at the Don Bosco program in Hornu. The fear of the Taliban forced him to leave everything behind to embark on a dangerous journey without being accompanied by adults. Like many, he will have to find another program after he turns 16 because he will age out of the Salesian school. Salesian missionaries are working with other Salesian programs and local programs in Belgian communities in the hopes of helping youth make an easier transition once they reach their later teens and need to seek assistance elsewhere.

“I did not know where to go, but I could not continue living in my country,” says Saidi. “I wish I never had to leave my country. But no doubt I am very grateful for the opportunities they are giving me.”  The journey of young refugees is not easy. They have to face different cultures and customs but most young people arrive with the desire to learn and help.

“The boys are attending courses in all subjects including French and English language, mathematics, science, religion, physical education, drawing and music,” says Professor Flore Dubois who conducts a French course for foreign students. “There is a spirit of cooperation among them. If someone does not understand an exercise, another helps. The older ones are motivated by the desire for a job. For most of them, their priority is to be allowed to stay in Belgium when they are of age.”

There are challenges for young refugees settling in to new programs and new routines. The director of the Don Bosco School, Annie Michel, points out the difficulties encountered by these youth and Salesian staff.

“Our two classes are largely composed of Afghans and Syrians, and it’s not easy for these young people to integrate into our rules,” says Michel. “I learned that children in their countries obey school rules, but from the age of 12 to 18, teachers are no longer involved. It is important to work hard on training, to integrate their code and avoid misunderstandings. Despite the difficulties, these young people have an amazing thirst for learning.”

Since the end of 2014, Europe has been experiencing a maritime refugee crisis of historic proportions, according to the United Nations Refugee Agency (UNHCR). The ongoing conflict and violence in Syria, Iraq and other parts of the world is causing large-scale displacement and refugees are seeking safety beyond the immediate region. In 2015, and the first months of 2016, almost 1.2 million refugees and migrants reached European shores, most fleeing conflict and persecution. In 2017, more than 118,000 have risked their lives to reach Europe by sea. UNHCR notes that an increasing number of families, women and unaccompanied children undertook perilous journeys across several countries and often faced exploitation on the hands of smugglers.

ANS – Belgium – Saidi, Afghan refugee child: “I am very grateful for the opportunities I am being given”