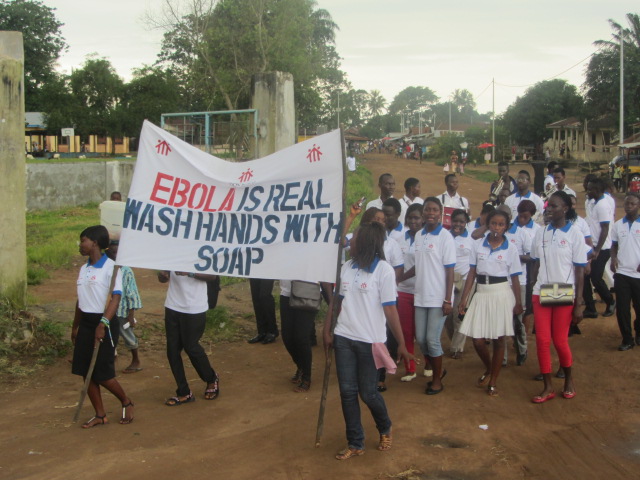 (MissionNewswire) Fortified rice-meals and emergency protective equipment have been donated to Salesian programs in Sierra Leone and Liberia thanks to an ongoing partnership between Salesian Missions and Stop Hunger Now, an international relief organization that provides food and life‐saving aid to the world’s most vulnerable.

The World Health Organization (WHO) has declared the Ebola epidemic a global health emergency. Salesian missionaries already living and working in affected West African regions are working with local communities providing food aid and education about Ebola while disseminating protective clothing including long-sleeve shirts and cleaning and disinfecting agents such as chlorine.

Starvation is a concern in the affected countries. According to reports from Salesian aid workers in the field, local markets have been shuttered and many farmers have died. Many school children who could previously count on at least one meal a day at Salesian schools are left hungry because schools have been ordered closed by the government in an attempt to contain the outbreak.

“Because of the Ebola health crisis, the price of food has risen and many people are at risk of starvation,” says Father Mark Hyde, executive director of Salesian Missions, the U.S. development arm of the Salesians of Don Bosco. “The partnership with Stop Hunger Now allows us to feed those most in need and provides us other necessary supplies to help prevent the further spread of Ebola.”

According to the WHO, 40 percent of total reported Ebola cases have occurred in Sierra Leone. In response, Salesian missionaries provided emergency food aid to 200 families in Lungi, a small coastal town in the northern part of the country. There, Salesian missionaries held information sessions to educate the local community in the town’s church and marketplace and even in the streets. Education is an important step in stopping the spread of the disease. The information sessions instruct residents how to properly wash their hands, how to effectively disinfect surfaces and how to adjust cultural habits such as frequent hugging and handshaking.

“People at risk are not properly informed,” added Fr. Hyde. “The Stop Hunger Now donation provides another avenue for us to reach people to educate them about Ebola, the risk factors and preventative measures, to help stop the spread of the disease.”

In Liberia, a recent Stop Hunger Now shipment contained rice meals as well as medical protective gear including gloves, masks and gowns. The contents of the shipment are being shared among organizations that make up the National Catholic Task Force, including Salesian missionaries, which have come together to address the Ebola crisis.

“The partnership with Stop Hunger Now allows Salesian Missions to expand its scope of services to those in need,” says Jessica O’Connor, property and logistics officer at the Salesian Missions Office for International Programs. “Stop Hunger Now is one of our favorite partners to work with because they are very flexible. They actively seek out opportunities to enhance shipments with additional donated items that the beneficiaries need, and they go the extra mile to help Salesian Missions meet any additional emergency requests that we receive.”

Salesian Missions is headquartered in New Rochelle, NY, and is part of the Don Bosco Network—a worldwide federation of Salesian NGOs. The mission of the U.S.-based nonprofit Catholic organization is to raise funds for international programs that serve youth and families in some of the poorest places on the planet. The nearly 30,000 Salesian missionaries are made up of priests, brothers and sisters—all dedicated to caring for poor children around the globe in more than 130 countries. The Salesians are widely considered the world’s largest private provider of vocational and technical training. Additionally, more than 1 million children attend Salesian primary schools, many of which are UNICEF-supported. Millions of vulnerable youth have received services specifically funded by Salesian Missions. These services and programs are provided to children regardless of race or religion. Funds are also raised to assist with humanitarian emergencies created by events such as natural disasters, wars and violence. Salesian Missions is the trusted partner of many nonprofit organizations for the delivery of aid and the implementation of programs including many funded by USAID and the U.S. Department of State’s Bureau of Population, Refugees, and Migration. More information at www.SalesianMissions.org.

Stop Hunger Now is an international relief organization that provides food and life‐saving aid to the world’s most vulnerable. More than 164,000,000 meals have been packaged and distributed with other life-saving aid to 65 countries, impacting millions of lives. The nonprofit provides more than just food aid. It also provides significant in-kind aid (such as food, medicines and other supplies) that support education and vocational training programs which are proven to have long-term sustainability—like those run by Salesian NGOs around the globe. Stop Hunger Now partners with Salesian Missions (in New Rochelle, N.Y.) which works to identify needs and coordinate delivery of 40-foot shipping containers full of meals, supplemented with additional supplies when available. The partnership was developed in 2011 and since that time, 58 shipping containers, including more than 16 million rice meals, have been successfully delivered to 19 countries around the globe. The meals and life-saving aid has helped to nourish poor youth at Salesian schools and care for those in need of emergency aid during times of war, natural disasters and health crises. Recently, two Stop Hunger Now shipments helped Salesian missionaries provide food aid and emergency medical supplies to missionaries working to help Ebola victims and their families in Sierra Leone and Liberia. More than 200 families benefited from this donation and the food aid provided an avenue for educational workshops about Ebola prevention and preparedness. Within the past year, Stop Hunger Now shipments were delivered and shared among Salesian programs in the Central African Republic, Uganda, El Salvador, Haiti and Honduras, among other countries. The Stop Hunger Now meal packaging program was created to give dedicated individuals the opportunity to participate in a hands-on international hunger relief program and to become educated, engaged advocates for the world’s poor and hungry. For more information, go to www.stophungernow.org.