USAID: Ending Extreme Poverty with a New Model of Development 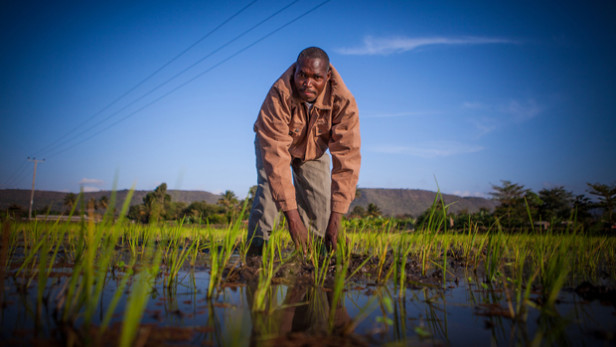 (USAID) Tonight, 860 million people will go to sleep hungry. This year, 6.6 million children will die before their 5th birthday. And every day, 1.1 billion people around the world—more than the population of North and South America combined—live in extreme poverty on just a dollar-and-a-quarter a day.

Even after adjusting for the relative price of local commodities, this is a desperately meager sum. With it, families must make daily choices among food, medicine, housing, and education.

We know it doesn’t have to be this way. For the first time in history, we stand within reach of a world that was simply once unimaginable: a world without extreme poverty.

From 1990 to 2010, the number of children in school rose to nearly 90 percent, and around two billion people gained access to clean water. Child mortality rates have fallen by 47 percent and poverty rates by 52 percent. In 2005, for the first time on record, poverty rates began falling in every region of the world, including Africa.

We now have a clear roadmap out of extreme poverty that is driven by broad-based economic growth and transparent democratic governance. With the deadline for the Millennium Development Goals drawing near—and conversations on the Post-2015 Development Agenda well underway—the global community has an opportunity to pioneer a new model of development and shape an inclusive, results-driven agenda that will end extreme poverty.

The Busan High-Level Forum on Aid Effectiveness has built a strong foundation for this effort—tapping into the capabilities of governments, foundations, companies, and civil society organisations to solve the world’s greatest development challenges.

Through this new model of development, USAID is forging high-impact partnerships to harness innovation and scale meaningful results to end extreme poverty. This month, we launched the U.S. Global Development Lab, a hub of creative design and high-impact collaboration that is setting a new standard for development. Together with 32 cornerstone partners, the Lab will bring innovators and entrepreneurs from across the public and private sectors to answer the world’s most pressing development challenges through science and technology.

Earlier this year, through our Development Credit Authority, USAID partnered with GE and Kenya Commercial Bank to help health care providers buy life-saving healthcare equipment, including portable ultrasound devices and Magnetic Resonance Imaging machines. For the first time ever, our private sector partner is covering the cost of the loan guarantee—making this program virtually costless for the taxpayer.

For most of the world, electricity allows businesses to flourish, clinics to store vaccines, and students to study long after dark. But for more than 600 million people in Sub-Saharan Africa, these opportunities simply do not exist. Power Africa encourages countries to make energy sector reforms—while connecting entrepreneurs to investment opportunities that are created by those reforms themselves.

Less than a year since launching, more than 5,500 mega-watts of power projects have been planned—putting us more than halfway towards the initiative’s goal of expanding electricity to 20 million homes and businesses. Just recently, we celebrated three local engineers who are lighting up Africa with solar-powered generators and pay-as-you-go power home meters.

Increasingly, the best ideas aren’t just coming from development professionals who have been in the field for three decades. They are also coming from scientists, inventors, and entrepreneurs around the world. That is why we launched the Grand Challenges for Development and created the Development Innovation Ventures fund—to enable problem-solvers to test their game-changing idea, whether it’s a mobile technology that boosts hospital efficiency or a $10 device that prevents the leading cause of maternal mortality.

A few years ago, we were lucky if we got half-a-dozen proposals in response to our solicitations. So far, these new kinds of open competitions have received more than 6,000 applicants—each with the potential to transform development. Even better, 70 percent of proposals are from inventors who we’ve never worked with before.

We look forward to strengthening this new model of development at the first High-Level Meeting of the Global Partnership for Effective Development Co-operation. Whether we work for a government agency or small local organisation, each of us can expand our emphasis on partnership and innovation. Each of us can deepen our focus on rigorous evaluation and scalable results. Working together, we can throw open the doors of development and engage millions of people in our mission to unlock a brighter future for all.