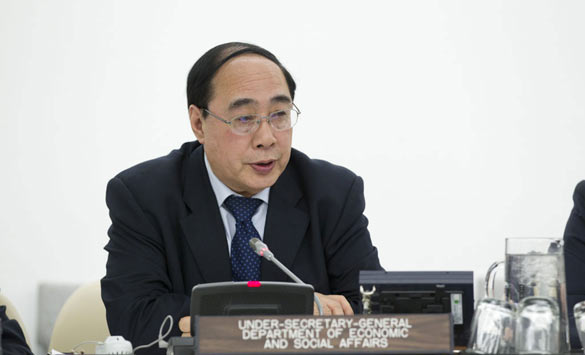 (United Nations)  The United Nations Commission on Social Development today kicked-off its 10-day session in New York with a call to give the poorest and most vulnerable populations the tools they need to lift themselves out of poverty.

“Empowerment is critical to poverty eradication and to development,” said the Under-Secretary-General for Economic and Social Affairs, Wu Hongbo. “Indeed, I would even say that any long-term solution to poverty must start with empowerment.”

According to Secretary-General Ban Ki-moon’s latest report on promoting people’s empowerment, nearly 80 per cent of the world’s population is without adequate access to social protection, leaving those living in poverty feeling powerless to improve their position.

The report, “Promoting empowerment of people in achieving poverty eradication, social integration and full employment and decent work for all” also states that while more than 600 million people have overcome poverty since 1990, 1 billion people will still be struggling to reach that goal by the 2015 deadline year for attaining the anti-poverty targets known as the Millennium Development Goals (MDGs).

In addition, the economic crisis and high fuel prices have slowed the rate of poverty reduction and increased unemployment rates, which also lead to social unrest. Globally, 200 million people were unemployed at the end of 2011, an increase of 27 million jobless persons since 2007, and 621 million young people are neither in employment, school or training nor looking for work.

“These are not mere statistics, but are lives affected, livelihoods lost and opportunities missed,” Mr. Wu said, urging the Commission to come up with concrete measures and actions for combating unemployment and empowering vulnerable populations.

To better understand how to promote empowerment and integrate it into the development agenda, participants at the Commission’s session will hear from experts leading discussions on this topic, as well as focusing on the elderly, youth, and people with disabilities.

The session will also include more than 30 side events and consideration of five resolutions as well as recommendations by the Civil Society Forum on promoting the empowerment of people to achieve social development goals.

Speaking at the Commission’s opening meeting, the President of the Economic and Social Council (ECOSOC), Néstor Osorio, said that without adequate policies and mechanisms, social tensions increase and erode social cohesion, which is essential for promoting development.

Mr. Osorio also underlined the potential of information and communications technology to empower people in rural areas or disadvantaged communities by giving them access to knowledge.

“These tools will allow people to have their voices hear and increase their visibility,” Mr. Osorio said, noting that this would be one of the aspects explored during panel discussions in the next few days.