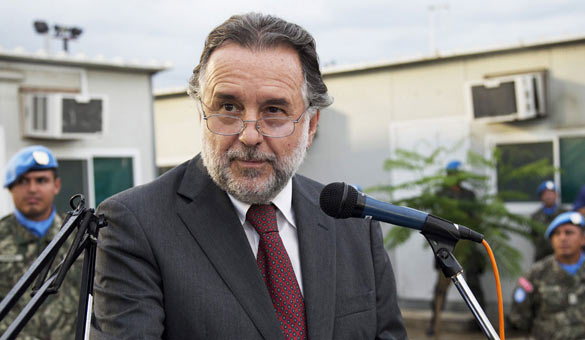 (United Nations) The outgoing head of the United Nations peacekeeping mission in Haiti says that during his 20-months tenure, security had greatly improved in the Caribbean country, but delayed elections and unemployment still threatened stability.

In an interview with UN Radio shortly before the end of his term on 31 January, Mariano Fernández, who served as the Special Representative of the Secretary-General for Haiti, said that he had recently highlighted the short-term threat posed by delayed legislative and local elections because political polarization was exacerbated by the issue.

“We have had a delay that we have declared almost unacceptable because the elections should have taken place 14 months ago,” stressed Mr. Fernández, warning of the threat to stability posed by the situation.

In the long-term view, employment, however, was the major issue. “They have a work force of 4.2 million people and in formal jobs they have only 200,000,” he said, adding: “So you have around 4 million people living in a subsistence economy, in a survival economy or living from remittances from the Haitians in exile, the Diaspora.”

“This is something that we should help the Government and the private sector and the Haitian people to face and to move forward on because this is a permanent source of instability,” he stressed.

Asked about the major accomplishments of the UN mission, known as MINUSTAH, during his tenure, he said that its greatest contribution was in greatly improving security and strengthening the police and other rule of law institutions.

“Security has improved a lot,” he said, pointing out that Haiti now ranked fourth in the index of the lowest number of homicides per capita in Central America and the Caribbean. “The challenges in security are now mainly the gangs in the some shanty towns around Port-au-Prince and the family violence, the abuse against women.

“But political violence doesn’t exist, kidnapping has been reduced and the cases of homicide are concentrated around Port- au-Prince,” he said, adding: “The rest of the country is very peaceful.”

He said that cholera has also been radically reduced, with fears of a spike in transmission following hurricanes Isaac and Sandy fortunately not coming to fruition.

He noted that Secretary-General Ban Ki-moon recently launched a campaign with the Ministers of Health of Haiti and the Dominican Republic to rid their common island of the disease during the coming year, appointing renowned United States physician Paul Farmer, to lead it. “I think we will have a serious success,” he said.

The Security Council established MINUSTAH in June 2004 to restore a secure and stable environment, to promote the political process, to strengthen Haiti’s Government institutions and rule-of-law-structures, as well as to promote and to protect human rights.

It has also helped support Haiti’s authorities with recovery efforts in the wake of the massive earthquake which struck in January 2010, as well as supporting preparations for presidential elections held in 2011.

Mr. Fernández, a native of Chile, took the reigns of MINUSTAH in April 2011 from Edmond Mulet of Guatemala, who took on the position after the earthquake. A successor for Mr. Fernández has not yet been announced.

See article at its original location >