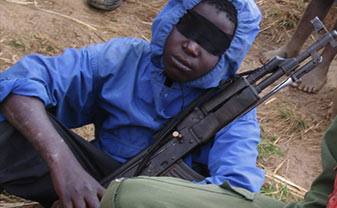 (United Nations) The United Nations Special Representative of the Secretary-General for Children and Armed Conflict, Ms. Leila Zerrougui, is deeply concerned about the situation of children in the ongoing conflict in eastern Congo.

The advance of the M23 armed group into Goma and Sake have been accompanied by serious violations committed against children. “Children have been killed and injured in the cross-fire, deliberately targeted and allegedly recruited as soldiers. I call on all parties to immediately halt the violence and spare children from the impact of conflict,” SRSG Zerrougui said.

Over the past four days, 16 children, including a two-year old child, were injured by bullets and explosive devices during clashes between the M23 and the armed force and security services. Yesterday, a boy was reportedly shot dead by M23 combatants in Goma because of his alleged association with Government forces.

“Children, especially those formerly associated with armed groups, are living in constant fear of recruitment or re-recruitment,” the Special Representative warned. Since the creation of the M23 in May 2012, the United Nations documented 44 children recruited into the armed group’s ranks as combatants and as porters, escorts and for sexual purposes.

“The international community cannot tolerate another wave of violence against children with impunity,” the Special Representative said. “External support to the M23 rebels has to stop, and those responsible must be held accountable in national and international courts.”

The Special Representative also welcomes the Security Council’s decision last week to impose targeted measures against the leader of the M23 Sultani Makenga, including for the use of child soldiers. She encourages the Security Council to consider imposing additional sanctions on perpetrators.

See this news release at its original location >

Related article about Salesian Missions and the conflict in eastern Congo >