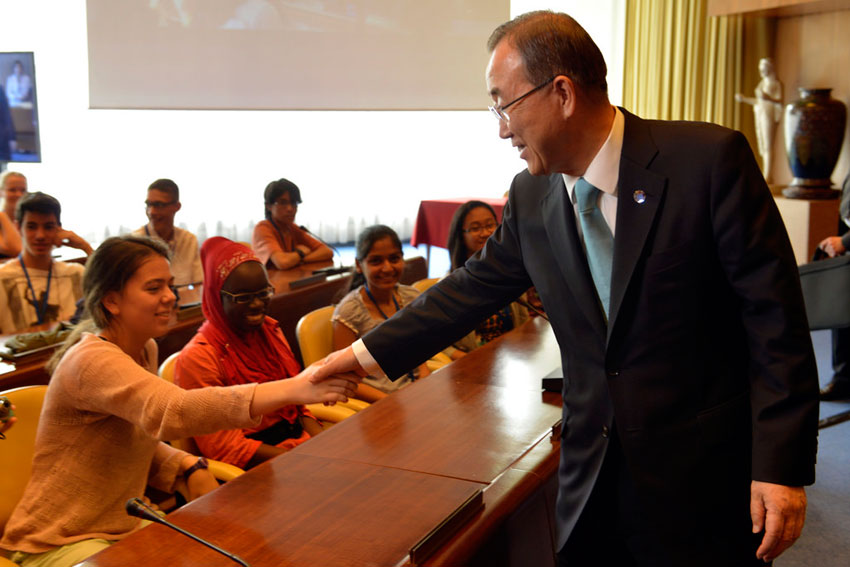 (United Nations) At a time when the international community is struggling to generate more jobs, especially for young people, United Nations Secretary-General Ban Ki-moon today urged Governments to invest more in youth employment initiatives and promote decent work for all.

“I believe employment and decent work, particularly for young people, are the backbone of development,” Mr. Ban said in his remarks to the UN International Labor Organization (ILO) in Geneva.

“Yet we are facing a great test of our time – an epidemic of youth unemployment,” he added.

Mr. Ban noted that half of the world’s young people in the labour force are either working poor or unemployed. The global youth unemployment situation is intolerable, particularly for young women.

“In countries rich and poor, unemployment rates for young people are many times those of adults – and, of course, joblessness is the tip of the iceberg,” he stated. “Many are stuck in low-wage work with no protection in the informal economy. Many others find that their schooling has not equipped them with the right tools for today’s job market.”

Half the world, said Mr. Ban, is under 25 years of age – nearly 90 per cent of them in developing countries. “These young people represent an enormous resource for innovation and development,” he stated.

“I have seen it again and again in my travels around the world – from social entrepreneurs developing smart, new business models … to young people creating green jobs and more sustainable economies … to youth leaders speaking out, and tweeting out, for change.”

In tackling the epidemic of global youth unemployment, the Secretary-General called on governments to invest more in youth employment initiatives and promote decent work.

Turning to young people, he stated: “You are the largest youth generation the world has ever known. You are already active in your organizations and as part of governments, trade unions and the private sector.

“I count on your energy, your leadership and creativity, to realize change and sustainable development. The United Nations wants to partner with you. Decent jobs for youth are essential to the future we want. Let us work for a world where nobody is left behind, where everybody can have a decent work. And let us work for a better world for all.”

While in Geneva today, Mr. Ban met with Nabil Elaraby, Secretary-General of the League of Arab States. They discussed the Syria crisis, including the priorities of humanitarian access and bringing the fighting to a halt, as well as the current search for a successor to Lakhdar Brahimi, the former joint Special Representative on the crisis.

They also exchanged views on the current state of the Middle East peace process, as well as on the ongoing crises in Iraq, Libya and Somalia, according to a read-out of the meeting.