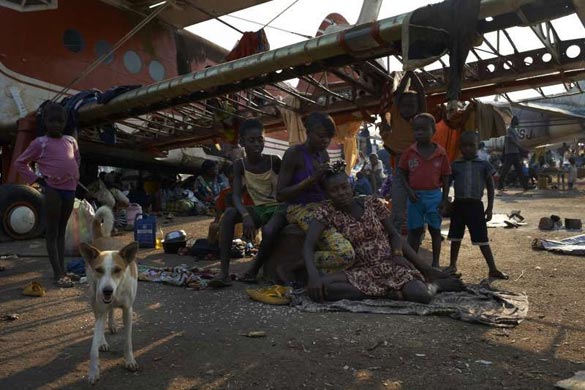 “In the situations of both South Sudan and CAR, we are extremely concerned about the safety of refugees and displaced people, particularly with access being affected by the fighting and insecurity,” UN refugee agency (UNHCR) spokesperson Adrian Edwards told a news briefing in Geneva.

“Today’s appeals reflect the worsening situations in both cases, with hundreds of thousands of people now affected.”

Of the new funding, $59 million are targeted for South Sudan, where well over 1,000 people have been killed and some 300,000 others driven from their home since fighting erupted between Government and opposition forces less than a month ago.

The remaining $40.2 million is destined for CAR, where thousands of people are estimated to have been killed, nearly 1 million driven from their homes, and 2.2 million, about half the population, need humanitarian aid in a conflict which erupted when mainly Muslim rebels launched attacks a year ago and has taken on increasingly sectarian overtones as mainly Christian militias take up arms.

Both requests by UNHCR, which are for the period to the end of March, follow appeals launched by the UN Office for the Coordination of Humanitarian Affairs (OCHA) on 31 and 24 December respectively on behalf of all UN agencies for $209 million for South Sudan and $152.2 million in immediate support for a 100-day plan for CAR.

Mr. Edwards said the situation has continued to deteriorate in South Sudan, where the number of people fleeing to neighboring countries has quickly increased to some 43,000 people, and Uganda now seeing between 4,000 and 5,000 arriving every day. Inside the country some 232,000 people have been driven from their homes, including 60,500 sheltering at 10 UN bases.

He said the appeal included projections of additional displacement between now and April. “It anticipates that refugee numbers could rise to 125,000 and that the number of people displaced within South Sudan could reach 400,000″, he noted. UNHCR emergency operations include

In both countries, the crises have displaced tens of thousands more people over the past three weeks and “insecurity makes assisting them more expensive, having to resort to airlifts for example when roads are not safe,” Mr. Edwards stressed.

UNHCR emergency operations include registering, sheltering and protecting refugees, providing supplies to displaced people, designing and managing camps for them, and protecting the most vulnerable among them.

Photo: Displaced civilians of Bangui take shelter in the shell of an aircraft at the city’s airport. UNHCR/S. Phelps