UNHCR: Chief calls for empowerment of women in a world in crisis 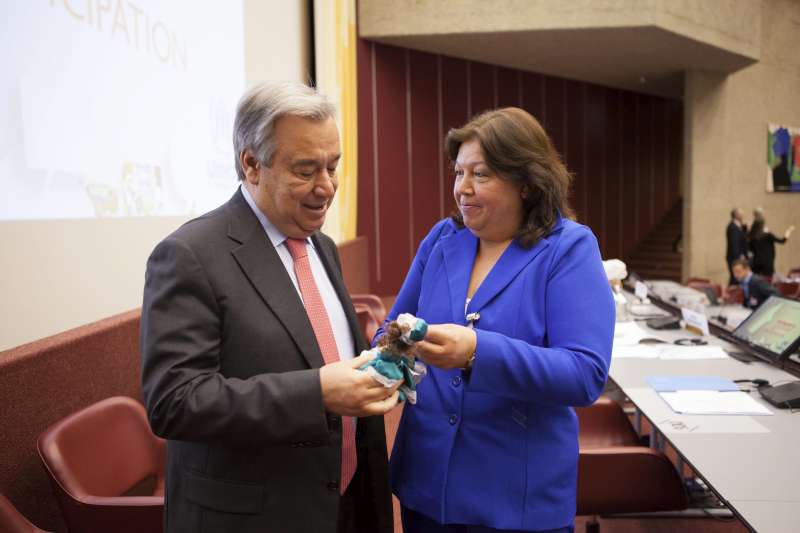 (UNHCR) UN High Commissioner for Refugees António Guterres on Tuesday told hundreds of aid workers in Geneva that the empowerment of women was vital to better resolve a multitude of problems facing the world, including multiple conflicts and gross human rights abuses.

“The key question for the world to be able to become more peaceful, to be more effective, with more solidarity and with better capacity for humanitarians to deliver [aid] in accordance with our principles… is the involvement of women,” Guterres said, opening UNHCR’s annual three-day consultations with its NGO (non-governmental organization) partners.

While welcoming the theme of this year’s gathering, “Women’s Leadership and Participation,” the High Commissioner stressed the importance of empowering women and girls. He added that he hoped the meeting would lead to “a meaningful commitment from all of us to do everything possible to make this empowerment happen.”

Guterres noted that “one of the problems of today’s world, one of the reasons why we see this multiplication of conflicts, we see this dramatic violations of human rights everywhere is indeed that we still live, especially from the political perspective, in a clearly male-dominated world. And it’s still a clearly male-dominated culture that prevails in the way government’s act, in the way that many international organizations… act, and in which even in some societies, civil society is organized,” Guterres noted.

“This is a world in crisis and we as humanitarians are in trouble,” he told the close to 500 delegates from more than 260 organizations attending the opening plenary session. “The challenges that we face are growing and growing in an unprecedented way,” he said, while adding that record forced displacement was being caused by a series of new crises at a time when old conflicts, like Somalia and Afghanistan, remain unresolved.

“This is leading to an enormous increase in humanitarian needs everywhere and an enormous challenge to our capacity to deliver. But it’s not only the conflict damage that is getting worse. It’s also the combination of factors, from climate change, to population growth, to food insecurity and water scarcity.”

He said that while the myriad of problems increases humanitarian needs, the lack of resources available, shrinking of the humanitarian space in which people can find shelter and be helped, and manifestations of xenophobia and racism, “are making our work more complex, more difficult and more demanding” and this affects the capacity to deliver to people of concern.

That, he stressed, is why UNHCR’s ties with NGOs are so important. “In this context, the value of partnership becomes more and more important. As environments become more difficult, we can only do it [get the job done] if we do it together,” he said.

“I think it is very important that our partnership… is global,” the High Commissioner told the meeting, while adding that “partnership needs to be strategic, we need to have a common view of the problems and a common strategy to face them… that is why I am so enthusiastic about our structural dialogue and efforts to make sure that that dialogue is projected in the fieldwork.”

Guterres also mentioned key protection areas that UNHCR would focus on this year – rescue at sea, detention, sexual and gender-based violence, detention of asylum seekers for illegal entry, and child protection, especially unaccompanied minors – and asked the NGOs to give UNHCR strong commitments on these issues.

The annual consultations will cover a wide range of issues in side events, thematic sessions and regional sessions. Aside from women’s leadership, topics include partnership; achieving self-reliance; protection at sea from the perspective of women; monitoring places of immigration detention; internal displacement; mental health and psychosocial support, and more.

For the first time, the annual consultations are making use of social media to allow an even more interactive discussion and enable NGOs as well as people of concern unable to be present in Geneva to share their views.

The closing plenary session can be watched online on https://new.livestream.com/4am/unhcr. People can join the event’s conversation via Twitter by following @UNHCRIAU and using the hashtag#UNHCRNGOs. Participants are also encouraged to submit their stories at the event’s Tumblr website,http://unhcrngos.tumblr.com.

For more than two decades, the consultations in Geneva have brought together NGOs and UNHCR managers to examine all aspects of their partnership on behalf of the world’s uprooted people. NGOs are vital partners for UNHCR, implementing programmes for refugees and internally displaced people in some of the world’s most remote and difficult places.

High Commissioner António Guterres receives a gift from Luz Mery Mesa of Asylum Access in Ecuador at the NGO consultations today in Geneva. Guterres talked of the importance of empowering women.