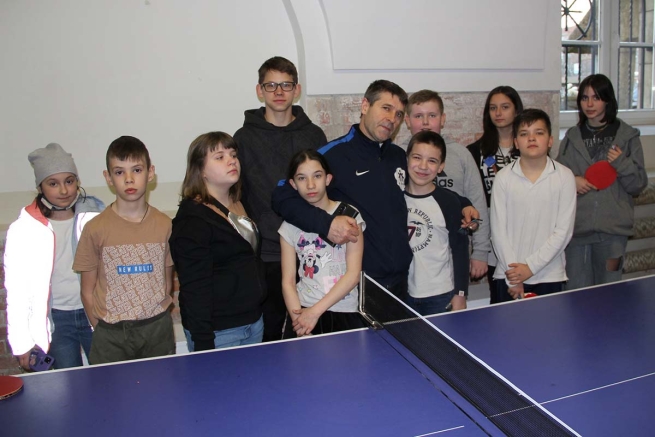 (MissionNewswire) The St. John Bosco Oratory in Warsaw, Poland, has been providing support and resources for Ukrainian refugees from the start of the conflict. Youth and their families have connected with programs and found resources from Salesian missionaries during this difficult time.

Coming from Lutsk, Ukraine, Andre and Roma’s families knew each other, although the boys attended different schools. At the outbreak of war, Andre and Roma, 15 and 14 years old respectively, left Ukraine in the same car with their families. There were 17 people clinging to hope of finding safety in a seven-seat car. It was under this difficult circumstance that the boys found friendship and a bond for life.

Andre recalled, “My mother woke me up to tell me that the war had started. We gathered everything and went to a nearby village. However, we were all nervous, so in the evening my parents, together with other relatives and friends, decided that we would leave the country.”

Roma added, “First, I accompanied my mother to a cash machine to withdraw as much money as possible, but they were no longer working. Then, between relatives and friends, we were 17 people in a seven-seater car, plus everyone’s little luggage.”

The trip to Poland’s border took nearly 20 hours because the traffic was so heavy. There they were told that the men could not leave. They then switched to a car going back, and another family joined the trip to Poland with Andre’s mother driving.

In Warsaw they live in a flat that a relative arranged for them. Roma said, “Our mothers are looking for work and we have been going to school for a week. The language is a bit difficult for us, but the other students are very nice to us.”

Every day they go to the St. John Bosco Oratory. Andre explained how they connected with the Salesians. “We didn’t know the Salesians before, but my mother saw a Ukrainian flag on the door and thought it was an information point. When we got home, she told us that she had found a wonderful place that was a big family.”

At the oratory there are leisure activities and snacks. Andre and Roma have met other young refugees like themselves, and they share concerns, games and dreams. They are hoping that the war will be over soon and they will be able to return home. They say, however, that they have felt so welcomed in Poland that one day they’d like to come back and attend the University of Warsaw.

Salesians in Poland have also been sending humanitarian aid directly to sites in Ukraine. Father Andrej Politch, a Salesian from the Krakow Province in Ukraine, said, “All the humanitarian aid is coordinated by the Diocese of Kyiv-Zhytomyr, led by Salesian Bishop Vitalii Kryvytskyi. He asked us for help and all the trucks arrive fully loaded. At the base of the truck, we put the boxes with food, which occupies more or less 60 percent of the load. On top, there are boxes with sheets, sleeping bags and medicines.”

Roman, a volunteer truck driver, appreciates the work of Salesians. He said, “I want to thank the Salesians. It’s really nice that there are people who take care of us. Thank you for your warm welcome, and for all the help and support. God bless you.”

The work is being supported through financial and material support by Salesian organizations around the globe. Salesians are present in more than 130 countries and nearly all have stepped up to help in some way.