Home / ANS  / UGANDA: A young refugee dreams of peace in the South Sudan while working with Salesian missionaries in the Palabek Refugee Settlement

UGANDA: A young refugee dreams of peace in the South Sudan while working with Salesian missionaries in the Palabek Refugee Settlement 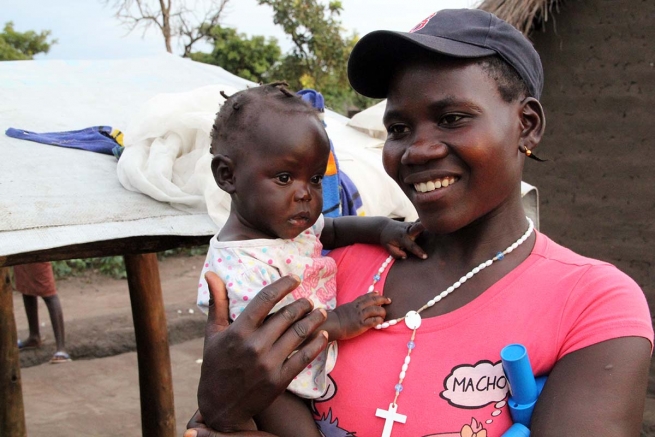 (MissionNewswire) Uganda hosts close to 1.3 million refugees, the majority coming from South Sudan which is 45km from the border. Salesian missionaries are providing pastoral, social development and educational initiatives to refugees living in the Palabek Refugee Settlement in northern Uganda.

The Palabek Refugee Settlement is currently home to 42,000 people with an average of 300 new refugees from South Sudan arriving each week. It was officially set up in April 2016 to reduce congestion in larger refugee camps in the northwestern corner of Uganda.

Several agencies are involved in providing food and education within Palabek. Salesian missionaries are offering much-needed psychosocial support and pastoral care for thousands of Christian residents. They also operate four nursery schools that educate more than 1,000 children. In addition, there are over 700 children attending Salesian primary and secondary schools and more than 700 families that are supported by various other initiatives. Salesian Missions is the only organization whose missionaries are living in the camp among the refugees.

Josephine is 26 and arrived in Palabek almost a year and a half ago. She fled the war in South Sudan when her village near the border was attacked and the shootings and violence made her fear for her life and for the lives of her three children aged 8, 6 and 3.

Josephine’s story is similar to that of most of the refugees who arrive at Palabek. Stories of having to flee at night to avoid being discovered and having to walk several days without food or water until reaching the border. Those fleeing include professional doctors, professors, policemen, lawyers and engineers. In the camp, they become refugees trying to reestablish their lives in a new country.

Josephine is an exception in Palabek as most of the refugees aspire to stay in Uganda and she wants peace in South Sudan so she can return home. She says, “My husband is a teacher and he works in the capital of South Sudan. We are in contact and as soon as the situation improves, I want to reach him.”

Josephine’s mother and brother live with her in a hut and take care of the children when they are not at school. Like all the families at Palabek, in addition to their humble home, they have a small 30 square meter vegetable garden. After meeting Salesian missionaries in the chapel, Josephine started to work with them. She explains, “At the beginning I would prepare porridge for kindergarten children, then they hired me as a cook.”

Josephine adds, “Salesian missionaries give us hope through the education they give to our children and the formation they offer to us. It is a way for us to feel useful when we think of the future, of peace in our country and of being able to return to our home.”

In order to better help refugees, Salesian missionaries are in the process of constructing a vocational/technical training center with the intention of offering life skills and other training to help youth prepare for employment.