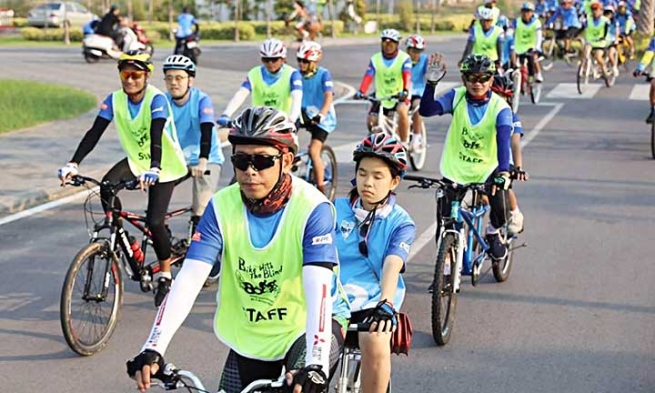 (MissionNewswire) The 80th anniversary of the Foundation for the Blind, which has patronage from the Queen of Thailand, was marked with a Bike with the Blind event in Bangkok, Thailand. With a theme of “Ride for Sharing,” the event paired sighted people with those who are visually impaired on two person bikes.

The event is chaired by Khan Prachuabmoh, president of the Foundation for the Blind, and Salesian Father Charles Velardo, a member of the foundation’s board of directors who is responsible for the activities.

Started in Chiangmai on January 27, the Bike with the Blind event’s final stop will be on July 7 in Bangkok. The ride took bikers through several cities including Nakorn Ratchasima, Khon Kaen, Chonburi and Surat Thani. Riders trained hard for the event and were able to showcase their skills to the general public. Sighted individuals had a chance to volunteer and help blind individuals take part in a sporting activity while raising awareness for the cause.

“Cycling is not the only initiative that Salesian missionaries have for the blind in Thailand,” says Father Mark Hyde, director of Salesian Missions, the U.S. development arm of the Salesians of Don Bosco. “Salesian missionaries also operate the Nonthaburi Skills Development Center for the Blind which was first established in 1978 by Italian missionary, Father Carlo Velardo, and the Daughters of Mary Help of Christians run a Skills Training Center for Blind Women.”

Each year at the Nonthaburi Skills Development Center for the Blind, 40 students with visual impairments embark on an intensive two-year educational program. When the program first started students were taught trade skills in carpentry and woodworking. Some students were able to find work but many others were denied employment because local employers feared workplace injuries and were put off by the higher costs of insuring visually impaired employees.

As a result, the program changed focus and in 1983 began training its students to be massage therapists. As an acknowledgement of the high-quality training offered and the program’s years of success, the Ministry of Public Health has begun to license graduates as doctors of Thai traditional massage. Most graduates are able to find work immediately and continue to hone their skills for many years. Through the program, the therapists-in-training see more than 150 clients each day.

One of the more marginalized groups in the country is people with disabilities. Men, women and children with disabilities have been cast aside and perceived as incapable of engaging in meaningful work and leading productive lives. Often those with disabilities, particularly those with visual impairments, are kept out of school and denied an education. As a result, their future employment prospects are diminished and the cycle of poverty continues.

ANS – Thailand – Cycling with the Blind