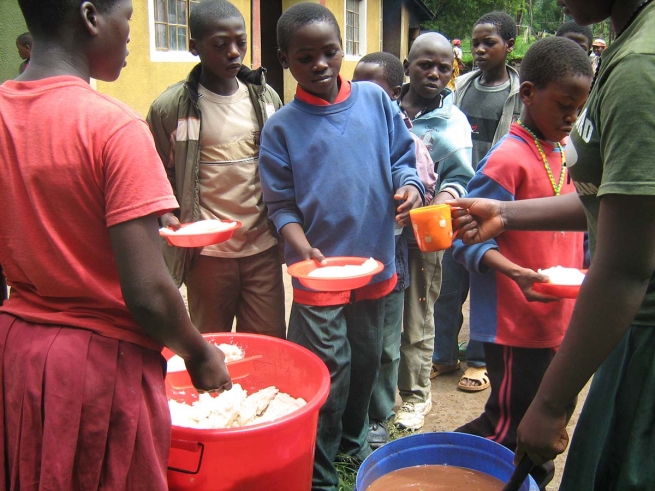 (MissionNewswire) Salesian missionaries started a mission in Mafinga, Tanzania in 1980 when they became aware of the need to open a house for 500 local orphans. According to the organization Tanzania Development and Prevention of AIDS, the disease is the second leading cause of death and leaves hundreds of children and teens with no family. The organization applauds Father Luis Neville’s work at the mission and its ongoing dedication to these orphans.

Fr. Neville recounts the story of Leah, one of the girls in his program. She was born in Mamba and has two brothers and a sister. Her parents were farmers, but when she was 5 years old, her father died. In 2003, she began to go to school, but unfortunately her mother also died. The children were left alone. The elders in the family and community sent Leah to live with her grandmother.

Father Henryk Tucholski, a Salesian missionary, met Leah and invited her to live in the Salesian house and included her in a Salesian school sponsorship program. Leah turned out to be an excellent student. After she finished primary and secondary school, she went on to university and is studying to become a teacher. Although she was not raised by her parents, she found a new family within the Salesian program and among her peers.

“We believe that soon we will have a new teacher dedicated to orphans and the needy young people of Mafinga. Leah understands their situation because she lived it herself,” says Fr. Neville.

Salesian missionaries also operate 10 vocational training centers in Tanzania where youth access educational programs and training in trades that can lead to future stable employment. In one carpentry program, students are busy manufacturing furniture for a local restaurant. In other programs, students are learning masonry, tailoring, plumbing and computer studies. The vocational centers also offer services that prepare students for the workforce, providing training in searching, applying and interviewing for a job and in how to retain a job once a student is employed.

“At Salesian technical and secondary schools and youth centers, Tanzanian youth are able to gain an education and develop skills to overcome obstacles,” says Father Mark Hyde, executive director of Salesian Missions, the U.S. development arm of the Salesians of Don Bosco. “They are often given a second chance in life by learning a trade of their choice in order to stand on their own and lead a productive life.”

Almost one third of people in Tanzania live in poverty, according to UNICEF. While the country has seen some economic growth in tourism, mining, trade and communication, the number of Tanzanians living below the poverty line has marginally increased due to rapid population growth. In some regions, up to half of the population struggles to meet the cost of essential food and shelter and other basic necessities like clothing, healthcare and education.

Children suffer the greatest in the country, with almost 70 percent facing deprivation in two or more of the areas of health, nutrition, sanitation, education, access to information, water supply and shelter. UNICEF notes that levels of deprivation among youth living in rural areas is up to three times higher than those of urban youth. In addition, many of the nearly one million children orphaned due to the AIDS epidemic are forced to leave school due to poverty or to care for their families.

ANS – Tanzania –”When Orphans meet a father”: the story of Leah