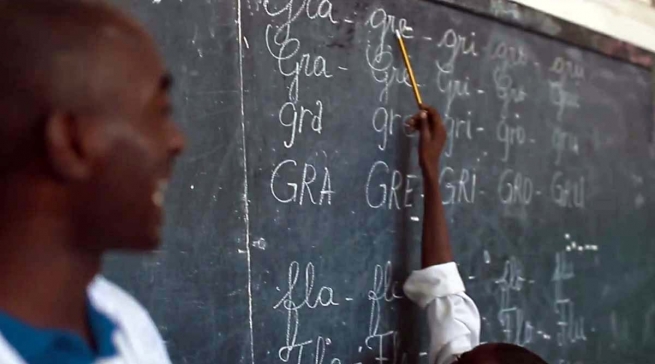 (MissionNewswire) Ahead of the recent G20 Summit, which took place in Hamburg, Germany on July 7-8, Salesian Missions in Madrid, Spain and the non-governmental organization Youth and Development launched a new education-focused campaign “A Pencil That Changes the Future” to encourage global leaders to keep a focus on education. On July 6, Salesian missionaries and volunteers went to the embassies of the G20 countries to deliver boxes of pencils as a symbol of the importance of education in global policies.

“Education has always been a priority for Salesian missionaries and lays a healthy and prosperous foundation for children,” says Father Mark Hyde, executive director of Salesian Missions, the U.S. development arm of the Salesians of Don Bosco. “A pencil may be the turning point in a child’s future. This campaign symbolizes commitment to education to change the future of millions of children and their countries.”

Global leaders from 20 developed countries met at the summit to discuss economic, financial, climate and trade policies, employment and development, along with other key global issues such as migratory flows and refugees, and the fight against terrorism. Prior to the event, Salesian missionaries joined with other organizations like UNICEF to encourage global leaders to make education a priority on their agenda.

UNICEF noted in a press release prior to the G20 Summit that funding shortfalls are threatening education for millions of children caught up in conflicts or disasters. More than 25 million children between 6 and 15 years old (22 percent of children in that age group) are missing out on school in conflict zones across 22 countries, according to a recent UNICEF analysis. Across the globe, nearly 50 million children have been uprooted—28 million of them driven from their homes by conflicts not of their making, and millions more migrating in the hope of finding a better, safer life. Research shows that refugee children and adolescents are five times more likely to be out of school than their non-refugee peers.

Salesian missionaries have more than 3,200 Salesian primary and secondary schools around the globe. Education has proven to be an effective means to break the intergenerational cycle of poverty, while giving the most vulnerable youth a sense of personal dignity and self-worth. Elementary and secondary education lays the foundation for early learning.

In addition, Salesian missionaries operate 850 vocational, technical, professional and agricultural schools providing youth the practical skills to prepare for employment and helping youth have productive lives while becoming contributing adults in their communities. These programs go beyond educating. They also assist youth with making connections within industries and preparing them for the process of searching, finding and retaining employment.

Each year, the location of the G20 Summit changes. Argentina will preside over the G20 in 2018. The meeting will serve to reach an agreement on the global career of teachers. The Minister of Education of Argentina, Dr. Esteban Bullrich, has already noted that, “The problem of education is global and can be solved, if we set global standards for teachers.”

ANS – Spain – “Shaping an Interconnected World”, without forgetting that education is the solution to problems: G20 in Germany