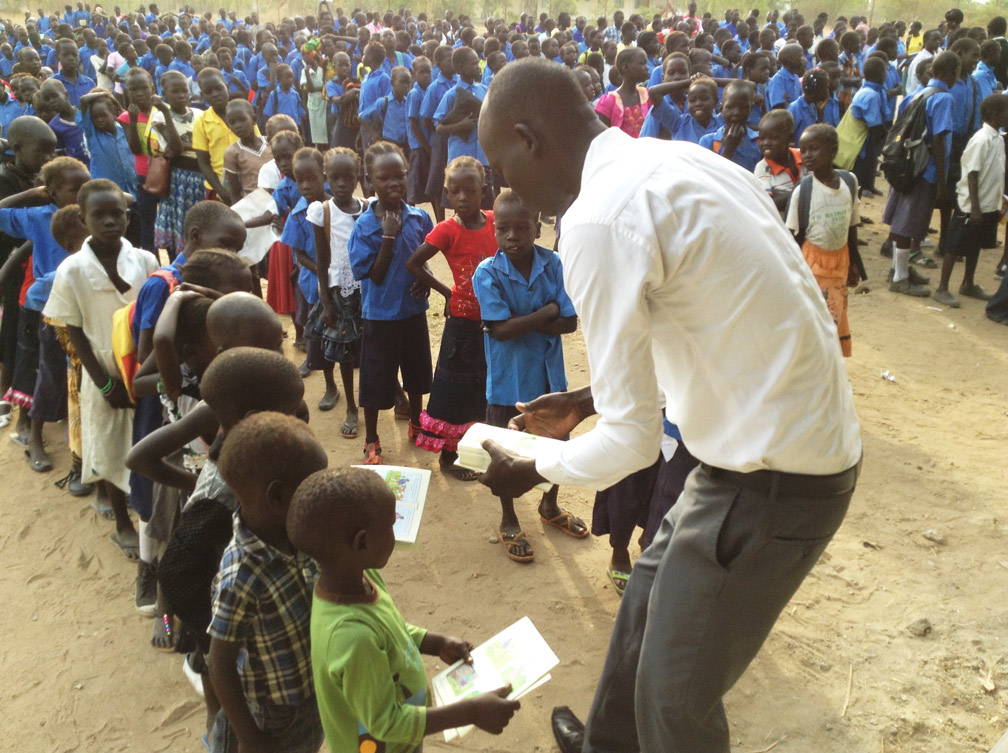 (MissionNewswire) Salesian missionaries at Don Bosco Gumbo, located in the town of Gumbo on the outskirts of Juba, the largest city and capital of South Sudan, have been continuing their work in the area despite violence and increasing famine in the country. Recently, missionaries have begun providing food aid to the more than 3,000 internally displaced people who are accessing shelter and services at Don Bosco Gumbo. Last month, 29 additional families arrived after fleeing violence in other regions of the country.

For students at the Don Bosco Primary School located on the Don Bosco Gumbo campus, Salesian missionaries are providing new pens, pencils and school stationary for the new school year. The primary school serves 1,000 children, many of whom are from families who have been internally displaced.

According to the World Bank, almost 83 percent of South Sudanese resided in rural areas before the outbreak of the recent conflict which has displaced more than 2 million people. Only 27 percent of the population aged 15 years and older is literate, with significant gender disparities. The literacy rate for males is 40 percent compared to 16 percent for females with less than 1 percent of girls completing primary education. The Don Bosco Primary School’s mission is to educate all students with a focus on ensuring that girls have equal access to education. Close to 45 percent of the school’s students are girls.

“Girls education is important to us, and we work to ensure that girls are welcome in our school,” says Father David Tulimelli, parish priest at the Salesian St. Vincent de Paul parish which operates Don Bosco Gumbo, “We are grateful to our donors who made it possible that we could provide our students the school supplies they need to be prepared for their lessons and complete their studies.”

South Sudan is one of the poorest countries in the world with 55 percent of its population living in poverty, according to the World Bank. The country celebrated its third year of independence in 2015 but is facing an ongoing civil war that started in December 2013 and has resulted in a dire humanitarian crisis.

According to a recent New York Times articles, international aid agencies have developed a report that indicates more than 2.2 million people in South Sudan have fled their homes over the past two years, including some 600,000 who have sought refuge in neighboring countries. Last year, according to the report, a new pattern of violence emerged in which government forces adopted scorched-earth tactics burning entire villages, killing their inhabitants, destroying crops and looting livestock. The civil war, which started in northern and eastern states has now spread to the south.

During the first year of the war, fighting was initially between Nuer and Dinka ethnic communities aligned with the rival leaders but of late a wider array of armed groups and communities have been drawn into the increasingly lethal violence. The international aid agencies’ report also detailed the severity of human rights violations and abuses that have increased with the continuation of hostilities in the country and noted that attacks that have singled out and killed children as well as subjected them to sexual violence. Further, the United Nations estimates that as a result of the conflict, 2.8 million people are currently facing “acute” food and nutrition insecurity in South Sudan’s Greater Upper Nile states.