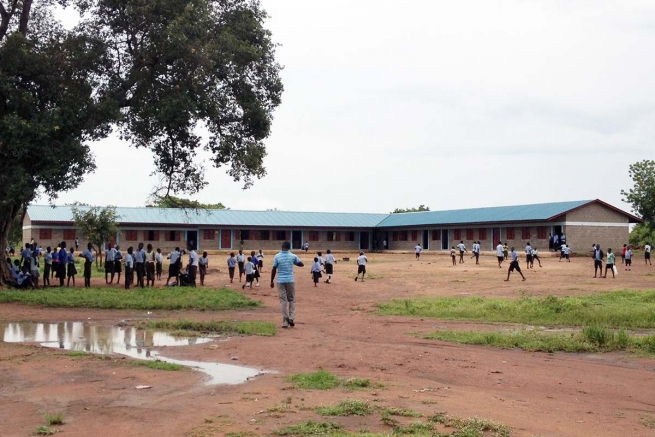 (MissionNewswire) The One Hundred Village Schools project launched in South Sudan in 2012 by the Salesian missionary office Don Bosco Nanum, based in Seoul, South Korea, has been a great success. To date, 74 elementary schools have been built and nearly 15,000 children have been impacted. These children are now engaged in education and gaining the foundational skills needed for higher learning.

The project was inspired by two visionary Italian Salesian missionaries, Father Vincenzo Donati and Salesian Brother Giacomo (Jim) Comino, both of whom after many years of missionary work in South Korea were assigned to the East Africa Province in 1981 and 1992, respectively. Initially many doubted the feasibility of such a large educational project, but their vision was welcomed with enthusiasm by many people, including the then Provincial of East Africa, Father Gianni Rolandi, and Father Pascual Chávez, then rector major.

The 74 new schools each have four classrooms and were made possible thanks to the generosity of many donors. One of those donors was South Korean Olympic gold medalist Yuna Kim who donated hundreds of thousands of dollars to the project. The funding donated was able to build one entire school. Other donors from around the globe, including those from Korea, Italy, Austria, Germany and the United States, made the schools project a success.

“Donors like Yuna Kim and others around the globe make a marked difference for Salesian programs and ensure Salesian missionaries can continue providing essential education and social development services to poor youth and their families,” says Father Mark Hyde, director of Salesian Missions, the U.S. development arm of the Salesians of Don Bosco.

Although the project is just shy of 75 percent complete, in the May monthly newsletter sent to Don Bosco’s benefactors, donors and friends, the director of Don Bosco Nanum announced the closure of the project, due to the challenging circumstances happening in South Sudan.

The United Nations Refugee Agency (UNHCR) has noted that nearly 2 million people are displaced within South Sudan, and close to another 2 million have fled seeking safety and shelter in neighboring countries. Many of those fleeing South Sudan are women and children. They include survivors of violent attacks and sexual assault, children who have been separated from their parents or traveled alone, the disabled, the elderly and people in need of urgent medical care. UNHCR has noted that South Sudan, the world’s youngest nation, has now joined Syria, Afghanistan and Somalia as countries that have produced more than a million refugees. It noted that an estimated 7.5 million people are in need of urgent humanitarian assistance.

Even with the closure of this one project, Salesian missionaries are dedicated to the programs and services they are providing across the country. They have been continuing their educational and social development programs while also responding to the ongoing humanitarian crisis. In addition to humanitarian aid, Salesian missionaries provide education, social development services, nutrition programs and health clinics for poor youth and their families in South Sudan. For some, the education offered at Salesian schools is the only opportunity to gain an education and the skills necessary for future employment.

ANS – South Sudan – A project that will remain in history: 100 primary schools for the country