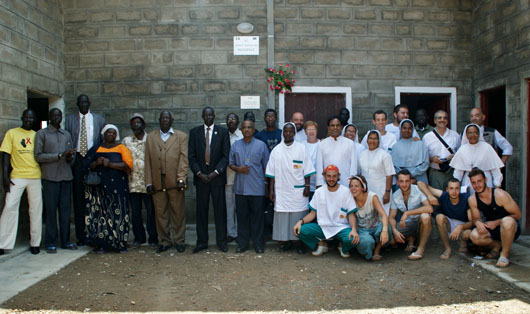 (MissionNewswire) South Sudan is one of the poorest countries in the world with 55 percent of its population living in poverty, according to the World Bank. The country just celebrated its third year of independence in July but is facing an ongoing civil war that started in December 2013 and has resulted in a dire humanitarian crisis.

The civil war has left thousands dead and displaced hundreds of thousands more. Close to 80,000 people have sought refuge at several UN compounds across the country. In Juba, the largest city and capital of the country, 80 percent of those displaced are women and children. More than 350,000 people have fled to neighboring countries risking their lives and leaving everything they had behind.

South Sudan just entered its rainy season, and being a country with few paved roads, the flooded and muddy streets hamper relief efforts. UNICEF and the World Food Program recently issued a warning that South Sudan is falling rapidly into a nutrition crisis that could result in the deaths of more than 50,000 children from malnutrition over the course of this year. Over 7 million people are at risk of food insecurity and 4.9 million of them are in urgent need of humanitarian aid.

The current rainy season also presents a looming health crisis in the country. In May, a cholera outbreak was confirmed bringing with it the imminent threat of a health emergency. With only 15 percent of people having access to adequate sanitary latrines and 30 percent without access to safe water, the rainy season increases the risk of diseases, in particular diarrheal diseases.

Salesian missionaries have been working in Tonj, a town in the northwest region of South Sudan, for several years. Their focus has been on providing education and social development services for poor youth through the operation of primary and secondary schools and youth centers. In addition, the missionaries operate several medical clinics, including a leprosy clinic.

Recently, the Salesians of South Sudan, in collaboration with the Tonj Project Onlus, completed the first stages of construction on a new hospital in Tonj. The hospital will care for the poor and the sick in Tonj and its surrounding communities. The Tonj Project Onlus, founded by Salesian Father Omar Delasa of the Lombardy-Emiliana Province in Italy, provided volunteers who helped in the planning and construction of the hospital.

“Medical care is a very important part of Salesian work around the globe,” says Father Mark Hyde, executive director of Salesian Missions, the U.S. development arm of the Salesians of Don Bosco. “Salesian missionaries care for the sick in over 90 clinics and hospitals in the more than 130 countries we serve. Many of the hospitals and clinics are located in rural areas where access to medical care is limited.”

The new hospital in Tonj opened in late July after four years of planning and construction. The current facility consists of maternity and surgical wards and a residence for medical and administrative staff. The hospital will begin operation in the coming weeks, and the fully completed building will open in 2015.

UNICEF – In South Sudan, response to looming threats of disease and malnutrition is a race against time and the elements