(MissionNewswire) In a year that has been the most violent since the beginning of a peace treaty in 2005 – underscored with high levels of corruption and human rights violations – the people of South Sudan had something to celebrate as their country became Africa’s 54th country and the globe’s newest nation on July 9, 2011.

This follows decades of civil war, and a referendum this past January in which nearly 99 percent of southern Sudanese who voted chose to secede from Sudan and form an independent nation.

The new nation enters a new phase while confronting humbling realities about the state of its people. South Sudan is one of the most impoverished countries in the world, has the world’s highest maternal mortality rate and struggles with very low literacy rates (90% of the female population remain illiterate). According to the United Nations, more than half of its people feed, clothe and shelter themselves on less than one dollar a day.

In an editorial published by the New York Times on July 7, Secretary General of the U.N. Ban Ki-Moon wrote, “I came to appreciate the sheer scale of these challenges, for myself, when I first visited South Sudan in 2007 — an area of 620,000 square kilometers with less than 100 kilometers of paved road. Within this larger context, the risk of increased violence, harm to civilian populations and further humanitarian suffering is very real.”

At the same time, he points out “South Sudan has remarkable potential. With substantial oil reserves, huge amounts of arable land and the Nile flowing through its center, South Sudan could grow into a prosperous, self-sustaining nation capable of providing security, services and employment for its population.”

A new USAID mission has been designated – in the South Sudan city of Juba – to address the country’s development needs and create a transition strategy to guide activities in South Sudan.

Specializing in meeting the needs of such marginalized youth, the Salesians of Don Bosco have been working in the region since 1982 – providing educational opportunities, housing, food, youth centers, health services and other needs to those otherwise without a voice or hope for the future. The Salesians’ work continued even during the most intense warfare in 1997 and 1998, followed by the starvation of many and an ongoing humanitarian crisis that continues today. The atrocities in Darfur sparked an international outcry for the entire region – as people not only fled for their lives due to violence, but also fought starvation, poverty and disease.

After the signing of the Comprehensive Peace Agreement in 2005, new opportunities arose for international humanitarian organizations to partner in the reconstruction of Sudan.

In response, the Don Bosco Network – an international network of Salesian NGOs that includes Salesian Missions in New Rochelle, NY – published a “Sudan 2007-11 Country Strategy Paper.” The paper included an outlined approach for specific interventions to help youth in the southern Sudan zone. Strategies included: improving access to schooling, especially for IDPs (internally displaced people) in the town of Wau; enabling the start-up of small enterprises in the Wau County by providing employment-oriented vocational training to youth; and promoting agro-based livelihoods in the Wau County through agricultural training and services.

As a result, Salesian involvement throughout Sudan has been further developed, including a strong presence in four of the cities in the newly formed South Sudan: Tonj, Wau, Maridi and Juba.

An educational program in Tonj – which consists of a primary school for 1,200 students and educational centers in the villages – seeks to make education more easily accessible to children.  Currently there are six such village educational centers with plans in place for more. Another essential service in Tonj is a Salesian-run health center which cares for approximately 250 out-patients every day and is the only medical facility available within 125 miles.

In Wau, a Salesian vocational school trains youth in general mechanics, carpentry and plumbing in addition to promoting agricultural projects essential to the town.

These programs are examples of the many operated by the Salesians in nations throughout Africa and the entire globe, from orphanages and feeding centers to training institutes. Connecting the newly formed nation of South Sudan with the East Africa region and the world in meaningful ways, will be essential to its future.

“South Sudan must also reach out to its other neighbors,” Ban Ki-Moon wrote in his New York Times editorial. “Across the globe — and in Africa, especially — the trend is toward regional partnerships. South Sudan will be strengthened by becoming an active participant in the regional organizations of East Africa and developing durable trade and political ties throughout the continent.”

Joseph Hobson contributed to this report. 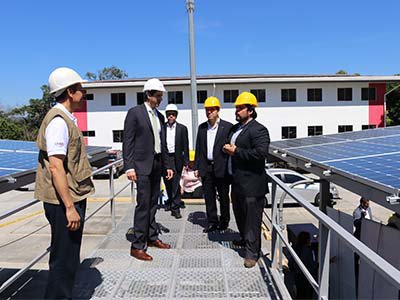