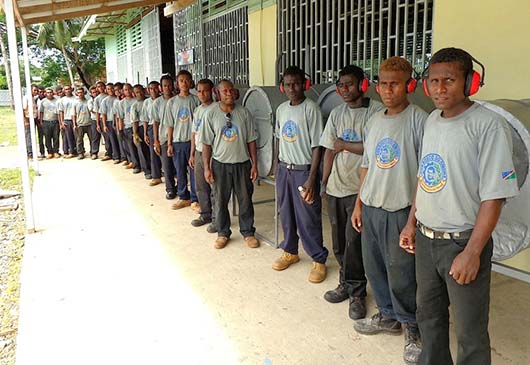 (MissionNewswire) The Solomon Islands is one of the poorest countries in the Pacific region with almost 40 percent of its population living in poverty, according to UNICEF. The majority of the country’s children live in remote areas where access to education is limited. Close to 25 percent of youth never attend primary school with 30 percent of those attending never completing. Limited access to education and an adult literacy rate of less than 35 percent perpetuates the cycle of poverty from generation to generation.

Eighty-four percent of Solomon Islanders reside in rural areas and rely on subsistence farming for their livelihoods. Limited access to healthcare and other social services and a lack of transportation, electricity and telecommunications infrastructure compounds already challenging economic conditions. With the majority of youth living in remote areas with limited educational and employment prospects, overcoming poverty is an uphill battle.

In April, the Solomon Islands faced two devastating cyclones that killed 23 people and left more than 9,000 homeless as a result of devastating floods, landslides and strong winds. According to an Australia Network News report, the capital city of Honiara and the whole island of Guadalcanal were declared disaster zones. Responding to this crisis, Salesian programs and schools opened their doors to affected families in need of shelter and other assistance.

For students attending the Salesian-run Don Bosco Technical Institute Henderson, in the Solomon Islands’ capital city, Honiara, it was a chance to help their community and give back to those in need.

As part of their term project, students in the machinist fitting and maintenance program made drum ovens for six families staying at the school during the flooding. Although the students had only been in the program for three months, within just a few weeks’ time, they were able to craft the ovens using two and a half drums and show off their skills in welding, cutting, grinding, polishing and painting as well as utilize the safety measures they had learned.

“While learning we could make something useful for a needy family, I feel very happy,” says Willie Laumanu, one of the contributing students.

Students in the carpentry program assisted additional families by donating tables, chairs, garden diggers and open fire potholders they had created. The garden digger was an innovative design, a sharpened flat plate of metal welded on a four inch round hollow pipe, created by George Oge, a former graduate of the institute and now the supervisor of its maintenance department.

The Don Bosco Technical Institute has been bringing new opportunities to poor youth in the area through education and skills training in the electrical, automotive, carpentry and machine fitting maintenance trades as well as life skills training and employment assistance for the past 10 years.

While the majority of students are male, the institute is working to increase enrollment of female students by encouraging them to take courses in more typically male-dominated trades as well as providing opportunities for those who previously left school due to marriage or pregnancy. Currently, most young women begin at the institute with life skills training followed by courses in teaching and nursing.

“Most of the students at the Don Bosco Technical Institute are from poor families and many have dropped out of traditional schools,” says Father Mark Hyde, executive director of Salesian Missions, the U.S. development arm of the Salesians of Don Bosco. “There, they are getting a second chance by learning skills that will enable them to find employment to support themselves and their families.”

This past year, the institute introduced a new course in the basics of hospitality and tourism that provides training for young men and women seeking employment in hotel management and the hospitality industry.