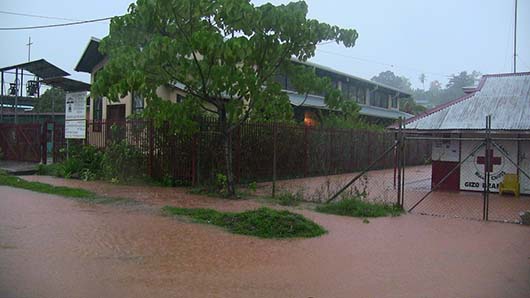 (MissionNewswire) The Solomon Islands are one of the poorest countries in the Pacific region with almost 40 percent of the population living in poverty, according to UNICEF. The majority of the country’s children live in remote areas where access to education is limited. Close to 25 percent of youth never attend primary school with 30 percent of those attending never completing. Limited access to education and an adult literacy rate of less than 35 percent perpetuates the cycle of poverty from generation to generation.

Eighty-four percent of Solomon Islanders reside in rural areas and rely on subsistence farming for their livelihoods. Limited access to health and other social services and a lack of transportation, electricity and telecommunications infrastructure compounds already challenging economic conditions. With the majority of youth living in remote areas with limited educational and employment prospects, overcoming poverty is an uphill battle.

The Solomon Islands face devastating cyclones during monsoon season which runs from November through April. In early April of this year, two cyclones tore through the Solomon Islands leaving a wake of destruction in their path. The Australia News Network reports that 23 people have died and 9,000 were left homeless after the devastating floods, landslides and strong winds. According to the same report, the capital city of Honiara and the whole island of Guadalcanal have been declared a disaster zone. The chairman of the Solomon Islands National Disaster Council says Honiara needs reconstruction, not rehabilitation, for roads, bridges and other infrastructure.

There are also growing fears of an outbreak of disease due to damage to the sewerage system and water supplies, which in some areas are completely destroyed. The National Disaster Management Office says dysentery, malaria, dengue fever and other diseases related to poor sanitation are all a real risk. The Solomon Islands Water Authority says 40 percent of Honiara is still cut off from the water supply, including many of the evacuation centers where people went to take shelter.

Salesian programs in the Solomon Islands have been affected. The Salesian-run Don Bosco Technical Institute Henderson in Honiara, which has been providing education and skills training in the electrical, automotive, carpentry and machine fitting maintenance trades as well as life skills training and employment assistance for the past 10 years, has sustained damage and flooding. The agro-technical center and youth center have also been affected.

A donated ambulance used by the program was swept away while Salesians were trying to save several families and was rendered beyond repair. In the seminary and pastoral center, the flooding is deep and seminarians are confined to the second floor of the building. The water has also reached the library in the building. Within the surrounding community, bridges are failing and many people have taken shelter within the cathedral and other Salesian buildings.

“Working in more than 130 countries around the globe, Salesians face extreme weather and other disasters and are prepared to handle what happens within their programs and communities during times of crisis,” said Father Mark Hyde, executive director of Salesian Missions, the U.S. development arm of the Salesians of Don Bosco. “Because Salesians were already working within these Solomon Island communities prior to the storms, they have been able to respond quickly to those in need, particularly those who have needed shelter,” he added.

In Tetere in the province of Makira, Salesians run the Don Bosco Rural Training Center where more than 120 young men and women are enrolled to learn farming and technical skills. After the cyclones hit, the local Salesian parish there was completely submerged in water. The hospital, school and the residence for the Salesian Sisters who run the school were saved thanks to the work of volunteers who raised embankments of gravel. However, with several bridges having been swept away, Tetere remains cut off from aid.

Salesians continue to work within their local communities in the Solomon Islands providing education and training to poor youth and assisting those in the community as best they can.