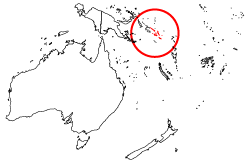 (MissionNewswire) Salesian missionaries in Gizo, the capital of the Western Province in the Solomon Islands, inaugurated the St. John Bosco Primary School. The ceremony was attended by 205 students who will attend first to fifth grade at the new school. Parents and community representatives were also present.

The new school has six classrooms and a multipurpose room, as well as three houses for school staff. The construction project also included a cemented path, enabling children to walk free from injury to and from the buildings.

The children attending the school come from communities located in the area most affected by the 2007 tsunami. This includes the fishing village of Nusabaruku and other small villages in the coves behind Nusabaruku. People must travel to Gizo from these small villages by boat. The new school is located on the top of the hill known locally as Millionaire Point, which has now been renamed Nusa-Bosco (Bosco Island). 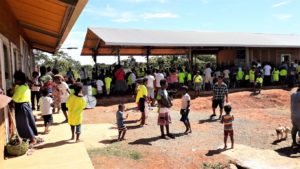 The new school was made possible by the Salesian Missions Office “Don Bosco Mission Bonn” in Germany and Opera Don Bosco Foundation in Milan, Italy. Local authorities in the Solomon Islands leased the land to the Salesians where the school is built. The school was constructed by several past pupils of local Catholic schools, known as Diocesan Boys. These graduates have been trained by Italian volunteers who worked hard over the past 13 years in the post-earthquake and tsunami reconstruction program of the diocese of Gizo.

A Salesian missionary in Gizo said, “We are grateful to God for this gift to allow these 205 children to gain an education and grow into good Christians and honest citizens of the Solomon Islands. We might not see the fruits of what we are planting right now, but the children will receive the fruits of their education.”

About 12.7 percent of the population of the Solomon Islands lives below the poverty line. Roughly 20 to 25 percent of youth in the country never attend primary school with 30 percent of those attending never completing school. Limited access to education and an adult literacy rate of less than 35 percent perpetuate the cycle of poverty from generation to generation.

Eighty-four percent of Solomon Islanders reside in rural areas and rely on subsistence farming for their livelihoods. Access to health care and other social services is very limited, and the poor to nonexistent access to reliable transport, electricity and telecommunications infrastructure compounds already challenging economic conditions. With the majority of youth living in remote areas with limited educational and employment prospects, overcoming poverty is an uphill battle.