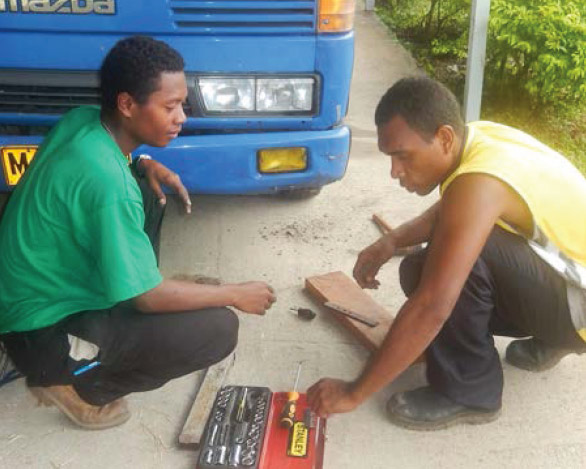 (MissionNewswire) The Salesian-run Don Bosco Rural Training Center in Tetere Bay in the Solomon Islands is working to bring educational and workforce development opportunities to poor youth in rural areas. Programs at the center help youth gain a basic education as well as the vocational or technical skills needed to find and retain employment.

More than 200 young men and women are enrolled at the school to learn farming and other high demand trades. Courses are offered in planting and care of crops such as rice, corn, vegetables, root crops and fruit trees as well as basic fish farming and forestry. There are also courses in basic mechanics, carpentry, electrical work, computer skills and dressmaking. In addition, literacy and music classes are available in the evening.

The center recently marked its 10-year anniversary with a celebratory gathering that was attended by more than 500 young people. The event included talks on leadership and youth taking responsibility for the future of their nation, numerous sporting activities and a vibrant concert that showcased a variety of talents.

“Most of the students who attend the center are from poor families who have dropped out of traditional schools,” says Father Mark Hyde, executive director of Salesian Missions, the U.S. development arm of the Salesians of Don Bosco. “At the Don Bosco Rural Training Center, these students are getting a second chance to acquire skills that will enable them to find a job and support themselves and their families.”

The center benefits from a partnership with the Rotary Club of North Balwyn, located on the outskirts of the city of Melbourne in Australia, which helps provides program and infrastructure support as well as encouragement to the Salesian missionaries and teachers who operate the center. The club’s support has injected new life and enthusiasm into the center through new ideas and practical suggestions.

Over the last few years, the Rotary Club of North Balwyn has made several donations to the Don Bosco Rural Training Center. This monetary support has funded a three-month intensive training course in rice cultivation for the center’s deputy principal as well as the installation of three new water pumps, a concrete rice-frying platform, 400 mosquito nets and timber for new bunks at the student boarding house.

One of the most important contributions to the center was the purchase and installation of a windmill in 2013, made possible by financial assistance from the Rotary Club, that ensures the supply of fresh water to the rice paddy fields that are integral to a feeding program for the students and teachers. Considered one of Don Bosco Rural Training Center’s greatest achievements is expanded rice production throughout the Solomon Islands by former students who applied the skills learned in Don Bosco programs in their home villages.

“Don Bosco Rural Training Center has the potential to be one of the Solomon Islands’ greatest producers of a new generation of youth who possess the energy, technical skills and integrity to help advance the country,” adds Fr. Hyde.

With almost 40 percent of the population living in poverty, the Solomon Islands is one of the poorest countries in the Pacific region, according to UNICEF. About 20 to 25 percent of youth in the country never attend primary school with 30 percent of those attending, never completing. Limited access to education and an adult literacy rate of less than 35 percent perpetuates the cycle of poverty from generation to generation.

Eighty-four percent of Solomon Islanders reside in rural areas and rely on subsistence farming for their livelihoods. Access to health and other social services is very limited and the poor to non-existent access to reliable transport, electricity and telecommunications infrastructure compounds already challenging economic conditions. With the majority of youth living in remote areas with limited educational and employment prospects, overcoming poverty is an uphill battle.