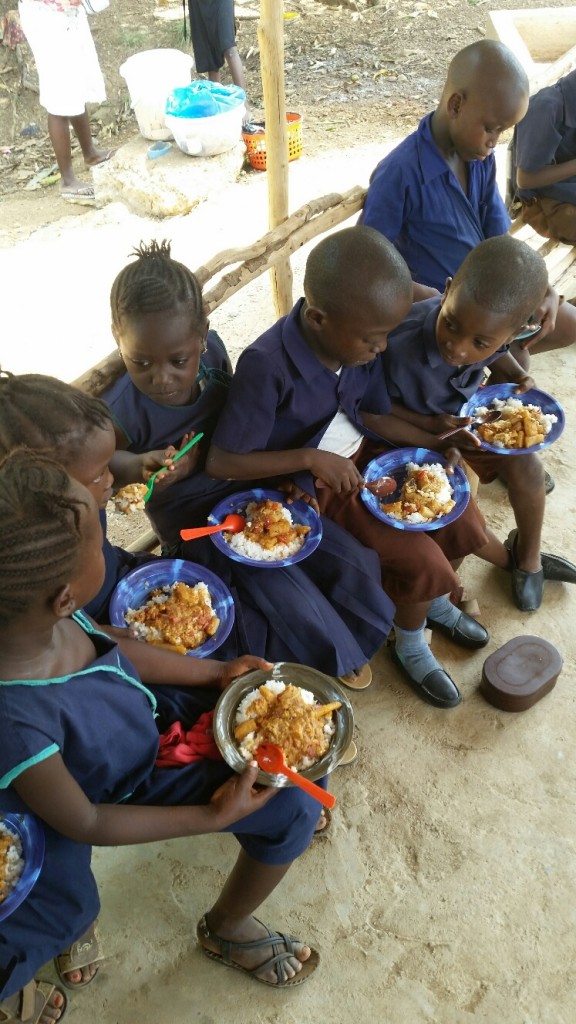 (MissionNewswire) Poor youth, the elderly and widows were those who benefited from a recent shipment of rice-meals thanks to an ongoing partnership between Salesian Missions and Feed My Starving Children, a nonprofit Christian organization committed to “feeding God’s children hungry in body and spirit.” More than 900 people in Sierra Leone have access to better nutrition thanks to this donation.

The Salesian Community in Lungi and Bo including St. Teresa’s Primary School Bo City, Saint Augustine’s Primary School, Holy Cross Primary School and Mother Teresa’s preschool shared this donation. The schools offer feeding programs so youth are able to have at least one meal a day and are better able to focus on their studies. The rice-meal donation was also shared with some of the teachers in the schools.

“Many of those participating in Salesian programs in Sierra Leone are malnourished,” says Father Mark Hyde, executive director of Salesian Missions, the U.S. development arm of the Salesians of Don Bosco. “For students, this donated food not only encourages them to attend school, it allows them to focus on getting the education they need without worrying about where their next meal will come from. Children cannot learn on an empty stomach.”

Feed My Starving Children’s Partner Assistance Program has allowed Salesian missionaries to share some of the rice-meals with other local nonprofit organizations. The Widows Welfare Association provided rice-meals to 540 widows—mostly the elderly, those living with HIV/AIDS, Ebola widows and recently widowed women who are finding it difficult to get food daily for their families and especially their children. Most of these widows are living below the poverty line and lack any means of livelihood that will provide them with a regular income in order to support their families.

Veriocia Demby, who lives at New London in the back of St. Augustine’s School Lungi, lost her husband during the Ebola epidemic. He was the bread winner of the family, and now Veriocia has four children to take care of on her own. Two years after her husband’s death, she does not have enough money to pay the school fees for her children or enough food to eat at home. Veriocia became seriously ill and was taken to the hospital where she met Salesian missionaries in Lungi. She was malnourished and could not stand for a very long time. After weeks in the hospital, she was discharged. She explained her story to a Salesian missionary and asked for food aid to help her family. She has been the recipient of a weekly donation of a box of rice-meals to feed her family. Her health and that of her children has improved since the donation.

“Salesian missionaries are an integral part of the existing infrastructure in many countries. Salesian Missions plays an important role in making sure aid from the United States reaches its destination country and gets into the hands of those who need it most,” says Fr. Hyde.