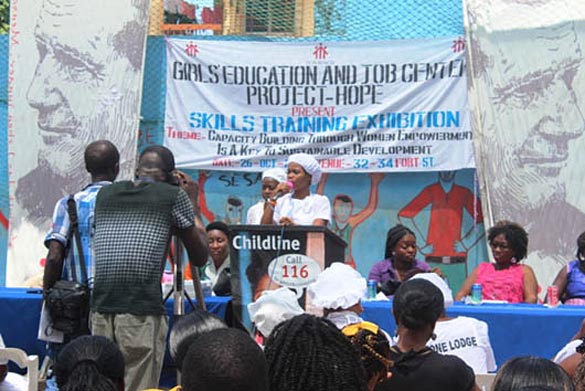 (MissionNewswire) Close to 200,000 young girls and older women were sexually assaulted during Sierra Leone’s decade-long civil war, according to UNICEF. And although the war has stopped, the sexual violence against women continues. Young women are at risk for sexual violence, trafficking and forced pregnancy, among other atrocities. Today, one third of girls are forced into marriage and often sexually assaulted by their husbands before their 15th birthdays. In addition, 90 percent of girls are subjected to female genital mutilation.

In response to this crisis, the Salesians at Don Bosco Fambul in Freetown have been running a Girls Shelter for the past two years. Here, professional social workers and pastoral workers provide crisis intervention and follow-up care for girls and young women who have been victims of sexual assault. Girls that access the shelter services are also able to attend educational programs that are a part of the broader Don Bosco Fambul network of programs. These educational programs give young women the skills necessary to find and retain employment.

“Education helps break the cycle of violence and poverty,” says Father Mark Hyde, executive director of Salesian Missions, the U.S. development arm of the Salesians of Don Bosco. “These young women have been so courageous in their fight against violence and oppression, and now they are able to live safely while getting the emotional support they need and the education that will help them live independently.”

After taking part in an 18-month skills training program, more than 60 former residents of the Girls Shelter were able to exhibit their skills and talents for the residents of Freetown. As part of their rehabilitation, these young women took coursework in hotel management, hairdressing and tailoring. Both the trainers in these programs and the students were able to present their skills and products to the general public.

Trainers were able to highlight their small businesses and entrepreneurship showing off their skills and reinforcing their expertise as educators. It also helped the young women see what they can attain after graduation. Preparation for the community exhibit was also part of the young women’s training and helped foster a renewed sense of confidence in their skills and talents.

In addition, the training has helped to empower the young women to overcome the discrimination they have faced and gain greater awareness of their rights. It has also helped to build character while allowing them the freedom to make decisions that affect their lives, improve their health and boost their work prospects. After having suffered tremendous disadvantages and violence in their past, these opportunities for a brighter and more stable future have been welcomed.

“Girls education is important to the overall community,” adds Fr. Hyde. “Through education, these young women can change their lives. They can help bring their families out of poverty and contribute back to the communities in which they live. Many have already given back by helping other young women free themselves from poverty and violence.”