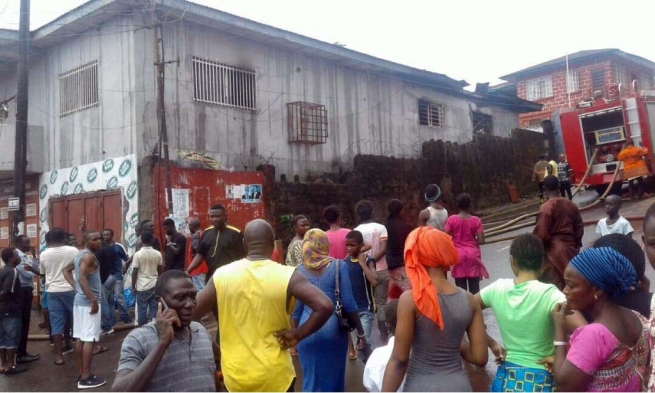 (MissionNewswire) On Sunday May 27, a devastating fire at a Don Bosco Fambul house in Freetown, Sierra Leone was caused by an electrical short-circuit. Everything in the Girls Shelter was lost in the fire and one of the 34 girls was slightly injured, with burns on her feet. The Salesian organization is one of Sierra Leone’s leading child-welfare organizations. The house affected is part of the organization’s Girls Shelter, which provides education and other services to girls and young women who have been victims of sexual assault and other abuses.

“When the fire happened, the girls ran away, but they were not able to save anything. Everything in the house was lost including mattresses, clothes, kitchen items, computers, documents, television and other items,” says Father Jorge Crisafulli, director of Don Bosco Fambul. “The most important thing is that the girls are safe, and we will go on as always. I think it was a miracle of Mary Help of Christians that the girl that was injured was saved. We will again need the help of everyone to give them back a home.”

Responding to the girls’ needs, Don Bosco Fambul has begun transforming its courtyards into a large multipurpose hall, while several rooms of the center have been prepared to accommodate mattresses for the girls to sleep. Fr. Crisafulli adds, “At the beginning it will be difficult, but these girls will not lack for anything, thanks to the solidarity of all.”

Close to 200,000 young girls and older women were sexually assaulted during Sierra Leone’s decade-long civil war, according to UNICEF. And although the war has stopped, the sexual violence against women continues. Young women are at risk for sexual violence, trafficking and forced pregnancy, among other atrocities. Today, one third of girls are forced into marriage and often sexually assaulted by their husbands before their 15th birthday.

The Girls Shelter is one of the nine programs run by Don Bosco Fambul. The program welcomes, houses and provides security and education to minors who have been abused in their families. It also helps support the victims in legal proceedings against abusers.

Salesian missionaries, professional social workers and pastoral workers come together to provide crisis intervention and follow-up care for girls and young women. Girls that access the shelter services are also able to attend educational programs that are a part of the broader Don Bosco Fambul network of programs. These educational programs give young women the skills necessary to find and retain employment.

With the participation and collaboration of the Salesian Mission Office in Madrid and the Spanish Salesian organization Jóvenes y Desarrollo, the Girls Shelter works to reintegrate these children and young girls into a family-like environment.