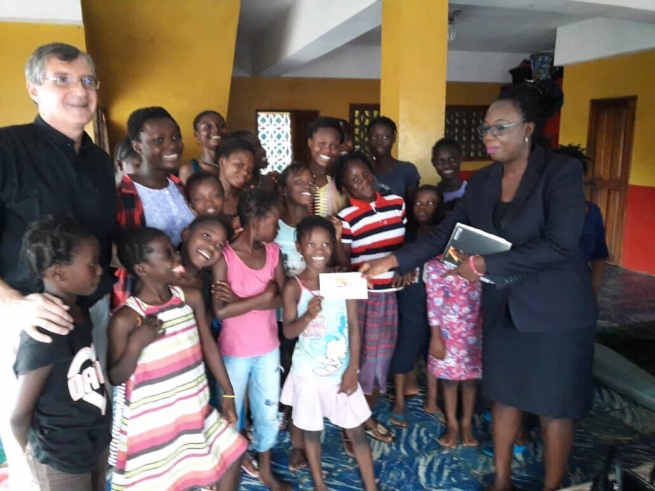 (MissionNewswire) The Don Bosco Girls Shelter which is operated by Don Bosco Fambul, one of Sierra Leone’s leading child-welfare organizations located in the capital city of Freetown, was recently reopened after a fire destroyed the building in May 2018. One of the girls received burns on her feet and everything in the shelter was destroyed in the fire which was caused by an electrical short-circuit. The shelter had provided education and other services to girls and young women who have been victims of sexual assault and other abuses.

Following the incident, Salesian missionaries immediately began planning how to rebuild. Letters were sent to companies, banks, individuals and other agencies to ask for help with the immediate reconstruction. Many people responded to the call and day by day missionaries received donations either in cash or as in-kind supplies, all geared towards the construction of the shelter. Don Bosco Mondo in Bonn, Germany offered to cover the remaining balance needed to finish the project.

An official ceremony was held for the reopening of the shelter with speakers commending the good work of Don Bosco Fambul in the country. Father Jorge Crisafulli, director of Don Bosco Fambul, expressed his thanks and appreciation for all the donors and their contributions towards the reconstruction and prayed that God would bless them to continue to help the most vulnerable children in society.

Father Crisafulli also thanked Emma Fofanah whom he called a “human angel” for her support and help ensuring the shelter would become what it is now. Nicky Spencer Coker expressed her thanks and appreciation to Don Bosco Fambul on behalf of Power Women 232, an organization in Freetown that aims to create an ecosystem of professional and entrepreneurial women. She noted how happy she was to see how far the shelter has come since she participated in its initial launch more than five years ago. Coker donated toiletries to the girls and promised to always support the shelter.

Close to 200,000 young girls and older women were sexually assaulted during Sierra Leone’s decade-long civil war, according to UNICEF. And although the war has stopped, the sexual violence against women continues. Young women are at risk for sexual violence, trafficking and forced pregnancy, among other atrocities. Today, one third of girls are forced into marriage and often sexually assaulted by their husbands before their 15th birthday.

The Girls Shelter is one of the nine programs run by Don Bosco Fambul. The program welcomes, houses and provides security and education to minors who have been abused in their families. It also helps support victims in legal proceedings against abusers.

At the shelter, Salesian missionaries, professional social workers and pastoral workers come together to provide crisis intervention and follow-up care for girls and young women. Those that access the shelter’s services are also able to attend educational programs that are a part of the broader Don Bosco Fambul network of programs. These educational programs give young women the skills necessary to find and retain employment.