REPUBLIC OF THE CONGO: Don Bosco Vocational Training Center launches new dressmaking workshop to teach women how to be seamstresses 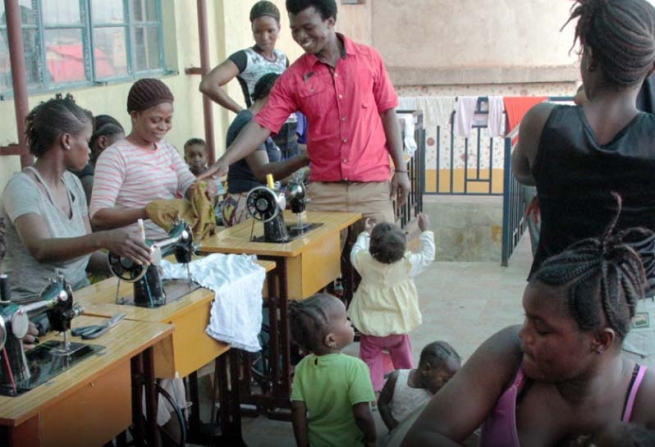 (MissionNewswire) On the outskirts of Brazzaville, the capital of the Republic of the Congo, the Don Bosco Vocational Training Center serves 600 youth each day, many from a local working-class neighborhood. The center recently created a dressmaking workshop to help educate young women in the community who have an interest in the subject.

Salesian missionaries want to ensure that young women have the same access to education and skills training as young men. The training course is working to attract women, including single mothers and those who left school. The course includes both cutting and sewing classes and helps young women gain employment as seamstresses.

In addition to the training as seamstresses, the first 35 trainees in the program will also receive help to start a small income-generating business at the end of the course. The goal is to help these young women support themselves and their families and feel like active and recognized citizens in society.

The project is supported by the Don Bosco Mission office of Turin, Italy. Helping these young women and single mothers gain the skills to earn an income benefits their entire family. Poverty and the lack of work opportunities are fertile ground for gender inequality, which manifests itself in every area of ​​public and private life. Learning a profession gives women the opportunity to claim the value of their role within the family and society.

“There are many barriers to education for young women and girls, but Salesian programs around the globe work to eliminate those barriers and provide education and skills training to all,” says Father Gus Baek, director of Salesian Missions, the U.S. development arm of the Salesians of Don Bosco. “Salesian missionaries have seen that young women who are able to access education are more often able to achieve financial independence and make better and healthier choices that affect not only themselves but their families and communities as well.”

The Republic of the Congo’s population is concentrated in the southwestern portion of the country, leaving the vast areas of tropical jungle in the north virtually uninhabited. One of the most urbanized countries in Africa, it has 70 percent of its total population living in a few urban areas.

In recent years, industrial and commercial activity has declined rapidly in rural areas, leaving rural economies dependent on the government for support and subsistence.

Most living in rural areas are small-scale farmers or fishermen. Those most vulnerable to living in conditions of poverty are young people and women who are the primary agricultural producers and processors. While more than 75 percent of people living in urban centers have access to water, access drastically decreases to 11 percent in rural areas. In addition, more than one third of children under age 5 who live in rural areas suffer from malnutrition.

ANS – Republic of the Congo – In a context hostile to women, a future as seamstress opens up for young mothers