ALERTNET: Quarter of Somalis Still Rely on Aid Despite Weakening of Shabaab 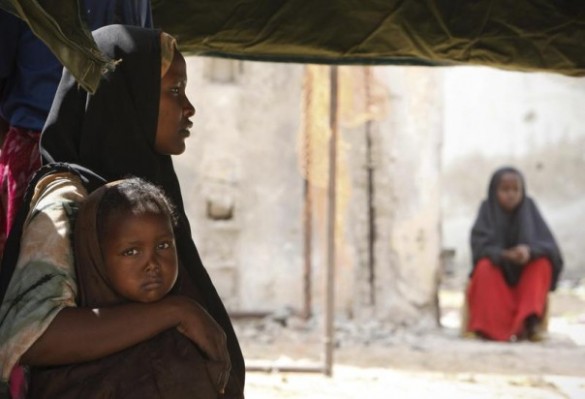 (AlertNet) – About a quarter of Somalia’s population still need aid to keep them from starvation and rebuild their livelihoods, even though much of the country has been stabilized by a campaign to drive back Islamist militants, the United Nations said on Thursday.

A United Nations report said around 260,000 people, half of them children, had died between 2010 and 2012 in a famine that had been exacerbated and kept out of view by the al Shabaab group, who at the time controlled large swathes of Somalia.

The militants have since been pushed back, mainly by African peacekeeping troops, although parts of the countryside remain under al Shabaab’s control or influence.

Somalia has been making a slow recovery and a new federal government is now in place in Mogadishu, but diplomats say the gains are fragile. Militants still stage attacks and aid workers say many Somalis still live a hand-to-mouth existence.

As well as bemoaning the restrictions that al Shabaab had placed on relief efforts in 2010-12, the United Nations said it had learned lessons from the famine that should ensure better help for the 2.7 million Somalis still reliant on outside help.

“Warnings that began as far back as the drought in 2010 did not trigger sufficient early action,” U.N. Humanitarian Coordinator for Somalia Philippe Lazzarini said in a statement.

“In the worst-affected areas, access to people in need was tremendously difficult,” he said, explaining in a news conference relayed from Mogadishu that famine-affected areas in south and central Somalia had been under al Shabaab control.

“We have been working with our partners to change the way we operate,” he said, adding that this involved better coordination between agencies providing health services, clean water and other support to improve resilience against future disasters.

Restoring order and rebuilding the economy are seen as vital to preventing a return to the war and anarchy of the past two decades that made Somalia a base for piracy in the Indian Ocean and a regional launchpad for Islamist militants.