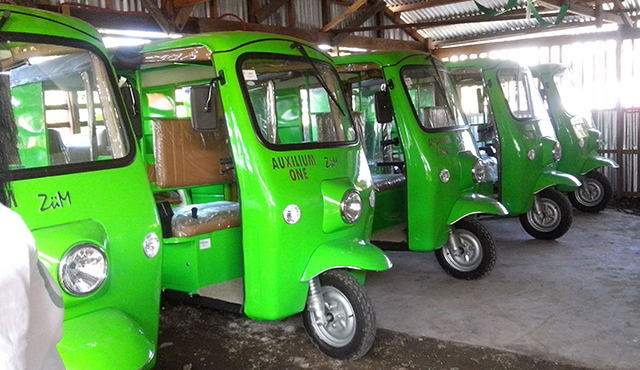 (MissionNewswire) More than one year after Typhoon Haiyan (also known as Typhoon Yolanda) devastated portions of Southeast Asia, particularly the Philippines, Salesian missionaries continue to work in the region to assist those who lost their homes and their livelihoods. While missionaries have successfully completed many community rehabilitation and rebuilding projects that have allowed survivors to return to their normal lives, there is still much work to be done.

Recently, EMotors Inc. delivered a fleet of zero-emission ZüM electric tricycles (e-trikes) to members of a Don Bosco multipurpose cooperative whose members consist of farmers and fishermen from Barangay Candahug in Palo, Leyte in the northeastern region of the Philippines. The e-trikes were made possible through donors and an EMotors partnership with Don Bosco Direct (Disaster Intervention and Emergency Response Coordination Team). EMotors is a 100 percent Filipino-owned manufacturer and assembler of ZüM e-trikes.

“Since the devastating typhoon struck in November 2013, ongoing restoration and rebuilding continues but the equally important component of livelihood restoration is yet to be fully met,” said Elizabeth Lee, president of EMotors, in a recent press release on the inquirer.net motoring website, Motion Cars, about the Don Bosco partnership. “The ZüM e-trikes as a means of livelihood sends a strong message of encouragement and hope to earnest Filipinos who are now struggling to find their place given the devastating circumstances the catastrophic storm left behind.”

The typhoon destroyed homes, businesses and methods of transportation. The new vehicles will allow many to get back to work while providing much needed transportation in the area. The new e-trike owners were provided a training on the vehicle’s usage and maintenance. The use of e-trikes instead of the gas-powered vehicles typically used across the Philippines will also help address the global issue of climate change by lessening the Philippine’s carbon footprint.

“We are privileged to be part of the community’s future as we mark another milestone in our goal to serve the needs of Filipinos for an affordable, low maintenance, innovative and easy to use vehicle, one that helps increase one’s income while at the same time, help clean our air,” said Lee, in the same press release.

In addition to the new e-trikes, Salesian missionaries are working on employment initiatives primarily in the farming, livestock management and manufacturing sectors designed to jump-start the local economy. By integrating research, technological advancement and vocational training in these areas, Salesian programs aim to create sustainable, long-term entrepreneurship and employment opportunities which, in turn, will provide typhoon victims and vulnerable youth financial security and hope for a better future.

“There is still much to be done,” said Vic Gocela, deputy coordinator for Don Bosco Direct, in the Motion Cars press release. “The arrival of the e-trikes may seem like a small step for the recipient drivers and operators, but it symbolizes one big step for the whole community. It gives inspiration and a ray of hope for many of our fellow Filipinos there.”

The super typhoon which struck on Nov. 8, 2013 was one of the strongest tropical cyclones ever recorded and the deadliest typhoon on record in the Philippines killing more than 6,200 people in that country alone. According to the United Nations, the super typhoon affected more than 13 million people overall. An estimated one million homes were destroyed and 4 million people were left homeless with close to 2.5 million of those displaced needing food assistance. More than 5 million of those affected were children, leaving 1.5 million children at risk of acute malnutrition, according to the UN World Food Program.

Motion Cars – A clean slate: Community starts over fresh in the New Year