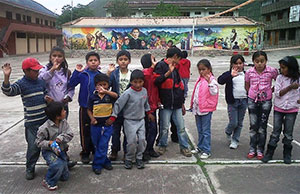 (MissionNewswire) The Don Bosco Home for Troubled Youth, located in Calca, Peru, was able to improve the condition of its facilities thanks to Salesian Missions donors. Funding was used to renovate a dilapidated part of the home and included the addition of a storage area and the repair of a previously unsafe basketball court and recreation area. Sports and recreation are an important part of Salesian programs, providing youth a chance to connect with their peers, gain team building skills and have fun in a supportive environment.

The Don Bosco Home is part of the larger Red de Casas Don Bosco initiative which serves hundreds of children and older youth, offering them a home, food, education and spiritual and psychological support. Red de Casas Don Bosco includes 11 boarding homes in the cities of Ayacucho, Arequipa, Cusco, Huancayo and Lima (Breña and Rímac) as well as the Cusco Alto Andinas missions including Ampares, Calca and Quebrada Honda.

Children and adolescents make up some of the most vulnerable segments of Peru’s population. Salesian programs aim to help poor youth gain an education while making sure their basic needs are met. All those enrolled in Red de Casas Don Bosco programs are minors who have lived in situations of social risk and have been forced to survive on the streets, sleeping in parks or under bridges. They have been deprived of love and affection and many are victims of violence, exploitation and abuse.

“Given the struggles in many communities across Peru, many families turn to Salesian programs for safety, education and social programs,” says Father Mark Hyde, director of Salesian Missions, the U.S. development arm of the Salesians of Don Bosco. “Youth need opportunities for education as well as access to safe places to play and connect with adults and older youth who are able to mentor them. They need to have all of their basic needs met as well as the support required to allow them to focus on their studies.”

Father Hyde adds, “We greatly appreciate all the Salesian Missions donors who have helped with this renovation project in Peru and other Salesian programs around the globe.”

Peru faces high levels of income inequality and has more than 21 percent of its population living in poverty, according to the World Bank. Poverty levels are significantly higher in rural areas but urban areas struggle most with inequality, most notably metropolitan Lima. Poverty in the country is made worse by a shortage of productive farmland and a lack of job skills among women entering the workforce, adequate housing, nutrition and education. Peru has also been plagued by hunger and disaster. According to the World Bank, close to 25 percent of children in the country are chronically malnourished.

Salesian missionaries working in Peru have provided life-saving support and education to poor youth and their families for many years. They have also helped with rebuilding efforts after the 8.0 earthquake in August 2007 which killed more than 500 people in the central coastal cities of Chincha, Pisco and Ica and injured hundreds more.