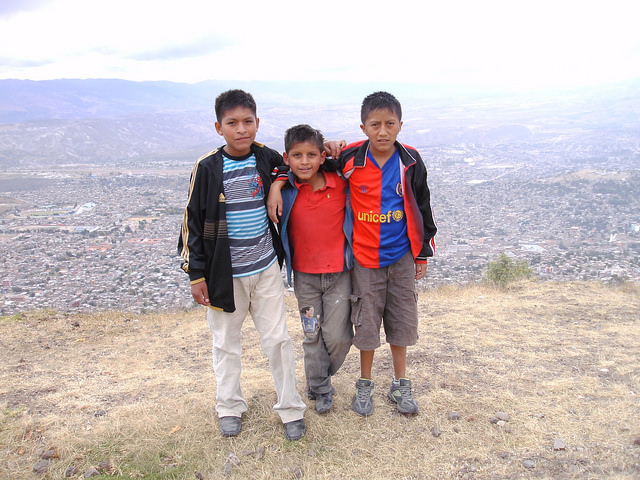 Children and adolescents are one of the most vulnerable segment of Peru’s population. This vulnerability requires special protection from the state, family and community. Salesian programs aim to help poor youth gain an education and have access to the basic needs they require. Youth engaged in Red de Casas Don Bosco programs are all minors who have lived in situations of social risk and forced to survive in the streets, sleeping in parks and under bridges. They are children deprived of love and affection, and many are victims of violence, exploitation and abuse.

Throughout November, Red de Casas Don Bosco, with the support of the Don Bosco Foundation, will promote a fundraising campaign “Your hand supports a hope.” During the campaign, Red de Casas Don Bosco and the Don Bosco Foundation dedicated one day to local fundraising by carrying money boxes to various parts of the city and inviting people and local businesses to donate. All proceeds collected during the campaign will be used to support the services offered to the children living in the homes of the Salesian network.

“Given the struggles in many communities across Peru, many families turn to Salesian programs for safety, education and social programs,” says Father Mark Hyde, executive director of Salesian Missions, the U.S. development arm of the Salesians of Don Bosco. “Youth need opportunities for education as well as have safe places to play and connect with adults and older youth who are able to mentor them. They need to have all of their basic needs met and the support needed to focus on their studies and gain an education.”

Peru has also been plagued by hunger and disaster. According to the World Bank, close to 25 percent of children in the country are chronically malnourished. Communities continue to rebuild after an 8.0 earthquake in August 2007, which killed more than 500 people in the central coastal cities of Chincha, Pisco and Ica and injured hundreds more. The quake destroyed close to 60,000 residential and commercial buildings, leveled hundreds of acres of farmland and left countless Peruvians without means of livelihood.