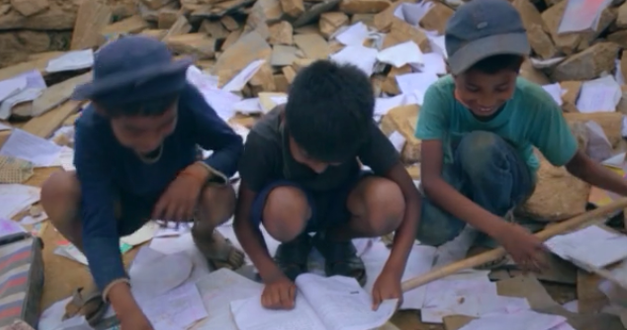 (MissionNewswire) Salesian Missions, the U.S. development arm of the Salesians of Don Bosco, recently released a video detailing its important relief and rebuilding work in response to the devastating 7.8 earthquake that struck Nepal on April 25 and a second earthquake that struck on May 12. Salesian missionaries have been firmly established in Nepal long before the devastating earthquakes hit this year, providing education, boarding homes and social development programs since 1995.

Nepal has struggled with a poverty rate of 25 percent even before the earthquakes and the rate jumps to 50 percent for those living in the mid-western and far western parts of the country due to rough terrain that makes farming almost impossible. Close to 80 percent of the country’s population live in rural areas and rely on farming to make a living and these rural residents, many affected by the earthquake, face the worst poverty. Most of these households have little to no access to health care, education, safe drinking water, sanitation or other basic services. In addition, nearly half of all children under the age of five in the country are malnourished.

The earthquakes exacerbated already challenging conditions especially for residents of remote villages and those living in poverty. More than 8,000 people died and close to 20,000 were injured as a result of the earthquakes and their aftermath. Forty of Nepal’s 75 districts were affected, 16 of them severely, with homes, schools, buildings, cattle, fields ready for harvest and other property destroyed. More than 500,000 people were displaced and remain in need of shelter and other assistance.

Salesian missionaries have been living and working within Nepal’s communities for many years and were among the first to respond with emergency relief after the earthquakes, providing food and water to those who had lost everything. Less than two weeks after the earthquakes, Nepal Don Bosco Society, a Salesian non-governmental organization, distributed more than 100 tons of relief materials including sixty tons of food and tarpaulins for temporary shelter to more than 30,000 people in 19 villages spanning six districts.

“Salesian missionaries have been able to reach out to many places, many villages, including those areas that government officials were not able,” says Bishop Paul Simick, Vicar Apostolic of Nepal. “There are other places that are very difficult to reach and we have heard that people are still waiting for the first relief to reach them.”

Today, months after the earthquake, Salesian missionaries are building temporary schools and addressing long-term training needs as part of their reconstruction and relief efforts, especially in the Kathmandu Valley where Salesian missionaries operate two programs. Don Bosco Thecho is a technical school located in the Kathmandu suburb of Lubhu and Don Bosco Siddhipur, located in the Lalitpur district, offers both a primary and secondary school.

The United Nations has noted that more than 32,000 classrooms and 1,383 schools were destroyed during the earthquakes. Salesian missionaries will utilize the skills of the newly trained students from Don Bosco Thecho to assist in the rebuilding of schools with a goal of reconstructing at least 40 schools. Each village in the area will be asked to form a school-reconstruction committee that will mobilize the villagers to contribute as much as possible in cash, labor and locally available materials. To date, more than 21 temporary learning centers have been completed. In a recent evaluation meeting with Nepalese government officers and other non-government organizations, it was acknowledged that the temporary learning centers built by the Salesian missionaries and students were of such high quality they could possibly serve as permanent school buildings.

Children of Nepal have been most affected by the earthquakes and getting them back to school has remained a priority for Salesian missionaries. Schools provide a sense of normalcy for children who have faced devastation and destruction. Along with normal classroom instruction, schools also provide psychosocial programs to help children process their fears and concerns as well as the changes they are experiencing as a result of the earthquakes and displacement. They also provide a safe haven from the human trafficking that has surfaced in the country in the wake of the earthquakes.

“As with any natural disaster, the children are the worst affected,” says Father Tony Valiaparackattu, a Salesian missionary serving in Nepal. “They have been displaced from their homes and families and have been traumatized by the scenes of devastation surrounding them. Many have lost parents, siblings or other loved ones. Their world has been turned upside down.”

Immediately after the initial earthquake, Salesian Missions launched an emergency fund to assist Salesian missionaries in Nepal. The funding goes directly to support relief efforts on the ground in communities and remote villages. Salesian Missions is urging the public to donate to its Nepal Emergency Fund. Go to www.SalesianMissions.org/Nepal for more information and to give to the relief efforts.