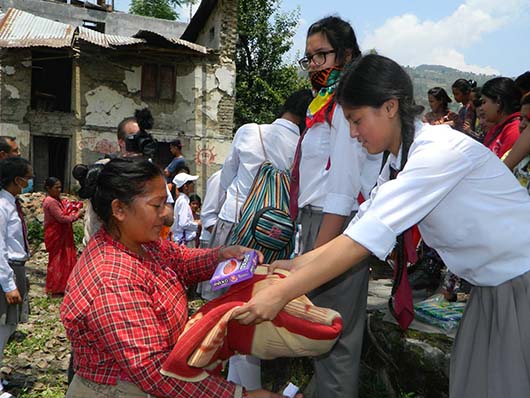 Forty of Nepal’s 75 districts have been affected, 16 of them severely, with homes, buildings, cattle, fields ready for harvest and other property destroyed. There are more than 500,000 people who have been displaced as a result of the earthquakes who are in desperate need of tents, food, water and medicine.

The second earthquake hit the already devastated regions of Dolahka and Sindhupalchok making an already difficult situation worse. Salesian missionaries have been tapping financial resources and organizing volunteers to aid as many victims as possible.

“An earthquake again rocked Nepal leaving us in shock and panic”, reported Salesian missionaries working in Kathmandu. “However, there was no damage to our properties and personnel that has been reported so far. Though warned of a more powerful quake than the previous one, no injuries or damages were reported from our communities and we continue to provide relief work.”

After the first earthquake, Salesian priests, brothers and sisters (who are living and working in Kathmandu and surrounding villages) immediately responded to those in need. Risking their own safety, Salesian missionaries assessed the damage and began bringing residents food aid and tarps to provide shelter to those who had lost their homes. Close to 1,000 people were provided aid the evening of the earthquake.

Once Salesian missionaries could access remote villages that were unreachable due to blocked roads and debris directly after the earthquake, they immediately supplied village residents with large quantities of provisions and relief kits including food, clothing, hygiene products and other necessities.

In the two weeks since the earthquake, the Nepal Don Bosco Society, a non governmental organization affiliated with the Social Welfare Council of Nepal, has reached out to more than 30,000 people (close to 7,800 families) within 19 villages across six districts and distributed more than 100 tons of relief materials. In addition, with funding from the Salesian Kolkata Province in India and other donors, 60 tons of food and tarps were sent across the border from Siliguri, India to Nepal.

Salesian Missions, the U.S. development arm of the Salesians of Don Bosco, launched an emergency fund immediately following the first earthquake to assist Salesian missionaries in Nepal. Salesian Missions offices in Italy, Germany, Austria, Australia, China, Korea, Japan and India have also been supporting the relief work on the ground in Nepal.

“Salesian missionaries have been providing education and social development services in Nepal since the 1990s, and because these missionaries are part of the community, they are well positioned to provide immediate aid after disasters like this earthquake,” says Father Mark Hyde, executive director of Salesian Missions. “Reports from missionaries on the ground in Nepal indicate that many people have lost everything and are living in tents exposed to cold and rainy weather. The second earthquake has caused more devastation and fear and has left those affected in a more desperate situation.”

Salesian Missions is urging the public to donate to its Nepal Emergency Fund, which will go directly to support missionaries currently working on the ground helping those affected by the devastation and aftermath of the earthquake. Go to www.SalesianMissions.org/Nepal for more information and to give to the relief efforts.

Don Bosco India – A Salesian response to the earthquake’s aftermath