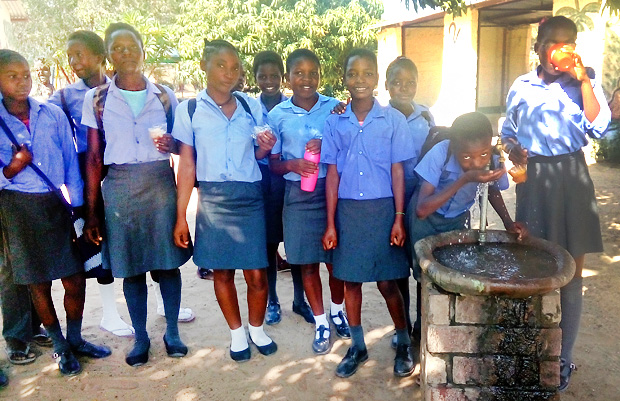 (MissionNewswire) Youth attending the Don Bosco Youth Center in Rundu, Namibia have access to clean, safe water thanks to the installation of a new water tank funded through donations to Salesian Missions. The project is part of Salesian Missions “Clean Water Initiative.”

As a result of this donation, Salesian missionaries report that the water situation has improved. Water is running most of the time and there has been an improvement in the hygiene of youth. In addition, youth programs are no longer interrupted because of water shortages.

“The water project at Don Bosco Youth Center was implemented very well and has produced very positive results,” says Father Louis Malama, project manager at Don Bosco Youth Center. “The new water tank has improved and provided sufficient clean and safe water for the young people who come for various youth programs at the center. We are thankful to our donors and to Salesian Missions.”

In response to this crisis, Salesian Missions, the U.S. development arm of the Salesians of Don Bosco, has made building wells and supplying fresh, clean water a top priority for every community in every country in which Salesian missionaries work. The project in Namibia is just one of many that have been completed, with more in process.

“Water is essential for life, and it’s critical that Salesian programs around the globe have access to safe, clean water for the health and safety of those we serve,” says Father Mark Hyde, director of Salesian Missions. “Improving water and sanitation facilities brings a sense of dignity to children and ensures that teachers and students are working and learning in an environment that promotes proper hygiene and has safe drinking water.”

According to the World Bank, Namibia is just one of nine countries in Africa considered as upper middle income, but poverty is still prevalent with extreme wealth imbalances. Namibia’s poverty rate is 32 percent with an unemployment rate of 29.6 percent. Poverty in Namibia is acute in the northern regions of Kavango, Oshikoto, Zambezi, Kunene and Ohangwena, where upwards of one-third of the population lives in poverty. HIV prevalence in the country is 16.9 percent.