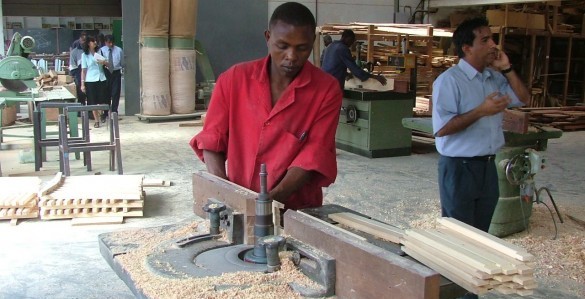 (MissionNewswire) The Salesian-run Bosco Boys program provides education and technical skills training to former street children in Nairobi, Kenya and is currently serving more than 600 boys and girls in primary and secondary schools and universities. The program also operates two nursery schools in the slums of Kariua and Kuwinda.

For Salesian volunteer, Polona Dominik, a young Slovenian social worker, working with the Bosco Boys program fulfilled a lifelong dream. She came to Kenya in February 2012 and volunteered for two years with the organization. Today, she works at the headquarters for the Don Bosco East Africa Province.

“I always wanted to work with and for street children, first in my home country of Slovenia, then in Ethiopia with the Bosco Children program and later in Kenya,” says Dominik. “We had close to 200 former street boys in the Bosco Boys program in Langata and Kuwinda (suburbs of Nairobi) plus others who were under our sponsorship after completing the program at Bosco Boys. There were new requests daily for admissions, so as a social worker there was a great deal that I could do, and a great deal that I have learned which I could not have learned anywhere else.”

Youth living in Nairobi’s slums are at-risk for exploitation, forced labor and other abuses. Few attend the later stages of school as compared to those living in Kenya’s more rural areas. The few schools serving this disadvantaged community are beyond the financial means of most families. UNICEF noted that while Kenya has free and compulsory education, youth in poverty still cannot afford to attend school resulting in close to 90 percent of children from poor households failing to complete their basic education.

“I met children and their families with stories of suffering, poverty, negligence, abuse and devastation,” adds Dominik. “Every day I was meeting boys whose families were absent or unable to provide food, shelter and education so youth were forced to look after themselves by stealing or by earning a little through jobs on the street. There are countless numbers of children living like this in the slums of Nairobi and only a small percentage have the possibility of rehabilitation in a center like Bosco Boys.”

The Bosco Boys program provides education and workforce development opportunities. Students in the program who complete their primary education are assisted with secondary education or are advised to choose technical training in sister institutions. The secondary education is most often provided at Don Bosco Technical Secondary School, Embu, but can also be at another school close to a student’s home where they can be easily monitored.

In addition to the education provided, youth in the program are given professional counseling to help them overcome any difficulties they may face in their lives. The program also gives youth the tools to develop a positive healthy outlook on life and the education and training necessary to find stable employment.

Despite the steady growth of Kenya’s economy, according to UNICEF, more than half of the country’s population lives below the poverty line on less than one US dollar a day. UNICEF also notes that Kenya’s capital city, Nairobi, is home to 3 million residents, most of whom endure lives of extreme poverty in the city’s slums. The most vulnerable are families and children living in these urban slums and in areas of the country most affected by HIV/AIDS. Many do not have access to healthcare, nutrition, sanitation and education.

ETHIOPIA: Salesian missionaries responding to needs of youth and their families in the face of the coronavirus pandemic