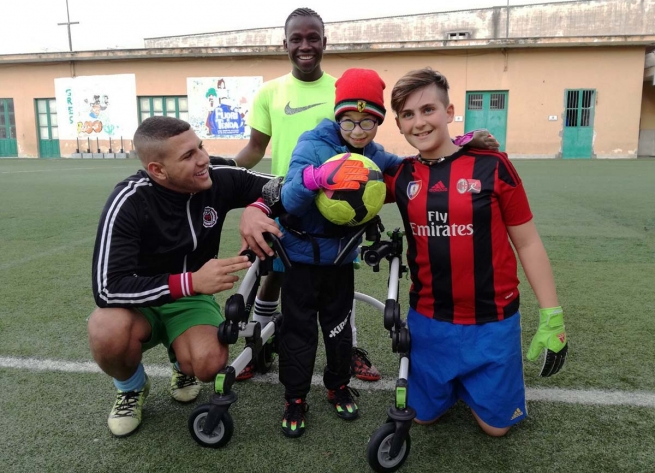 (MissionNewswire) Sports and recreational activities are an essential part of Salesian educational programs in Italy. They give youth a time to connect with their peers and help them work on problem solving and team building. Father Mimmo Madonna, rector of the Salesian House in the city of Locri, wanted to ensure youth had access to leisure, play and creativity. Part of the challenge was transportation to and from the local Salesian Youth Center so he solved this by renting a minibus to transport the children who lived on the outskirts of town.

“It started as a way to reach young people even in the most scattered districts of Locri, to bring them to the youth center where they could play, take part in training, and participate in formative and religious activities,” says Fr. Madonna. “The idea of ​​the bus was not to have our own means of transport, but to build up a network. By renting the Don Bosco Bus we managed to involve an honest and loyal local company and created public interest around this medium, which already offers a service accompanying the elderly from the hospital in the center of Locri. Now youth can get to school and the Youth Center as well as get safely back home each night.”

In another city, San Gregorio, near Catania, Salesian missionaries launched the “A Strange Rainbow: All the Colors of the Invisible” project. The aim is to help young immigrants engage in Salesian programs and connect with peers. The project was launched in February at the Salesian Institute of the Sacred Heart. It began with a shared meal and a soccer tournament between youth cared for by the Salesian programs and the local boys who attend programs at the Cultural Association, which works with young boys in need.

This project will offer sports, theater, music and dance and will help young immigrants raise awareness of their circumstances and to express their culture and feelings in their new home country. Matthew, a 9-year-old boy with a severe disability, is one of the children in the program. He has felt very welcomed by the project and has become a model for the community. While engaging in the project, he will have a chance to act on stage, something he has been wanting to do for a long time.

“Matthew was the star of the opening ceremony. He started off the project by walking to each of the football goals with his walking aid. Then he sat on the field with other young people, all of whom have different skills and challenges. Youth shared their experiences and learned from one another, which is part of the aim of the project,” says Father Cristian Philip Scuderi, a Salesian missionary engaged in the project.

The project aims for total integration of immigrant youth and works to knock down barriers by creating a platform for all youth, both new to Italy and local born youth, to engage and learn from one another. There is a richness in their diversity, which becomes a resource and a model of working together for the common good.

In Italy, Europe’s third-largest economy, close to 2 million children live in poverty, according to UNICEF. The poverty rate has risen in the wake of Europe’s economic crisis, and unemployment is at its highest level since the late 1970s with the overall jobless rate at 12.5 percent and youth unemployment as high as 41 percent. Some youth are unable to attend school and others drop out to work at the few jobs available to them. A growing number of children work as laborers on farms and others have turned to the sex trade to help support their families. Those in poverty often live without adequate shelter, hot water, regular meals and health care.

ANS – Italy – “A Strange Rainbow: all the colours of the invisible”

ANS – Italy – Reaching out to children and families on the margins: the Don Bosco Bus