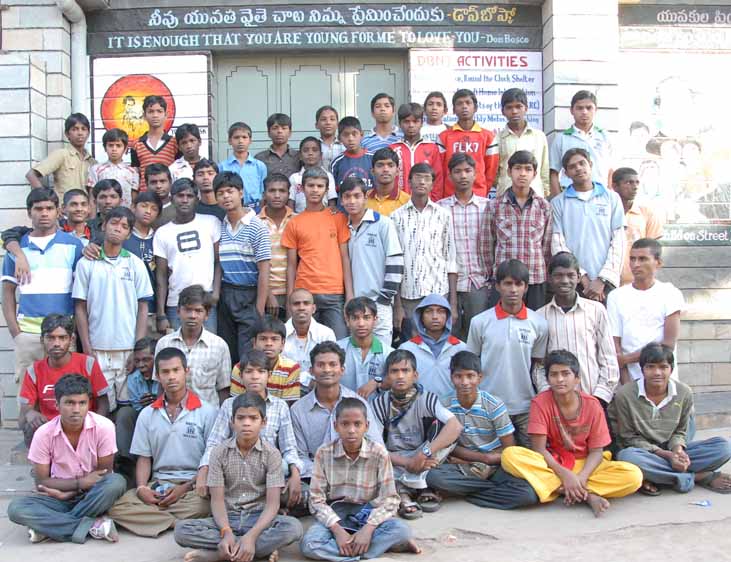 (MissionNewswire) According to the World Bank, India is home to 25 percent of the world’s poor and more than 30 percent of the country’s population lives in poverty. While progress has been significant and the number of out-of-school children has been reduced from 25 million to 8 million in the past eight years, India continues to have the largest number of child laborers in the world. In addition, an estimated 10 million children live on the streets facing the daily horrors of rampant exploitation, forced labor, widespread substance abuse and physical violence. Many poor youth see little opportunity or hope for a better life.

Due to the high number of homeless youth in the country, Salesian programs in India have been created to provide safe shelter, rehabilitation services and educational opportunities to those living on the streets.

In May, Salesian missionaries began two summer camps for street children in the twin cities of Hyderabad and Secunderabad, located in the Indian state of Telangana in central India. More than 100 youth from the Don Bosco Navajeevans Rehabilitation Center and the Salesian-run Daughters of Mary Help of Christians and the Sisters of Charity of Jesus centers participated in the two camps.

The camps ran from morning to mid-afternoon and focused on English language courses and social activities including music, dancing, football, basketball and volleyball. The camps provide recreation for street youth as well as teach important life lessons in collaboration, teamwork and working towards a common goal.

“The Salesians in India are working hard to rehabilitate street children and restore their childhoods,” says Father Mark Hyde, executive director of Salesian Missions, the U.S. development arm of the Salesians of Don Bosco. “Many take for granted things like having a safe place to sleep, enough food to eat and access to medical care. The Salesians recognize how critical it is to meet these basic needs before youth can focus on education.”

Salesians in India also work with the government and child protection system on training, advocacy and outreach program development to help reduce the number of street children and provide a safety net of resources for finding, identifying and rehabilitating youth currently living on the streets.

In April, BOSCO, a Salesian-run program that has been working with at-risk youth in Bangalore since 1980, held a training session for the city’s railway authority and police personnel to alert them to the risks faced by youth who arrive at the city railway stations and train them in how to safeguard the rights of these youth. The training was supported by the Department of Women and Child Development, the government of Karnataka and South Western Railways, Bangalore Division. More than 35 people took part in the day-long session.

Participants of the training learned about a week-long survey and rescue operation held in March by BOSCO staff in collaboration with the Department of Women and Child Development. This event helped rescue 202 children at the city railway station within a week’s time. Over the last 18 years, BOSCO has rescued and rehabilitated more than 50,000 youth at the city railway station.

“The children who come into our hands are safe,” says Father George PS, executive director of BOSCO. “The majority of youth we are not able to reach fall into the hands of the brokers and middle men who hand them over to the hotels as cheap labor or abuse and exploit them. If these children are not protected, there is a higher chance they will turn to criminal activity themselves.”

In meetings following the training, the National Commission for the Protection of the Rights of Children together with local Salesians developed the “Recommendations for the Protection of Children in Railway Stations.” These recommendations lay the ground work for future training and best practices for helping the city’s street youth population. The document highlights the need for separate services for boys and girls and for the continued education of at-risk youth on the dangers of living on the streets. The recommendations also call for police to adopt a more reassuring approach when encountering street children at the railways platforms and for better collaboration between all who are working for the protection of children.

“Salesians are making steady progress in fighting for children’s rights in India, but there is so much more to be done. As long as children face unspeakable hardships, Salesians will be there to offer shelter, education and other supports in the hopes of providing a brighter future,” adds Fr. Hyde.