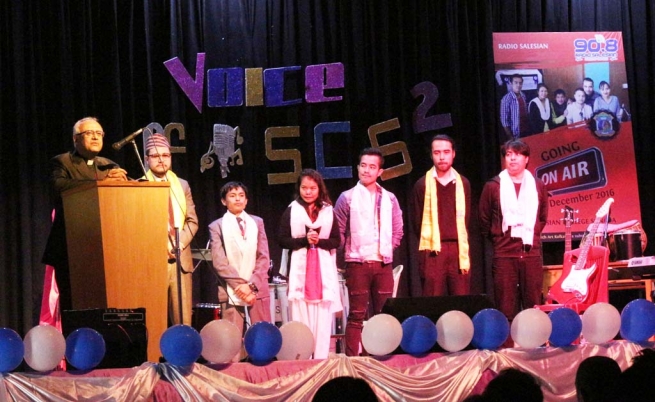 (MissionNewswire) Salesian missionaries at the Salesian College Sonada in Darjeeling, India began regularly scheduled programming for their new radio station on Dec. 8, with 20 different programs produced in the Nepali language. This radio station (90.8 FM) is the first community/campus radio in West Bengal and the entire northeast India to be operated by a college, according to a Vatican Radio news report.

The first regular scheduled broadcast was heard in Darjeeling and Siliguri, as well as Kurseong, Mirik, Sonada, Pashupati ‎‎(Nepal), Sukiapukuri, Balsun Valley and several other places. The web radio program can be accessed online or by mobile phone at the community radio link at www.salesiancollege.in.

“It is our Diwali gift to Nepali people worldwide,” said Salesian priest Dr. George Thadathil, principal of the college, speaking of the possibility on-demand radio provides for people everywhere to access programs of their choice at their own convenience, in an interview for Vatican Radio. “Our community radio will serve geographic and ethnic communities of the region with broadcast content that is popular, relevant and often overlooked by commercial or mass-media broadcasters.”

The Salesian College, which was founded in 1938, officially launched its web radio on Oct. 28, 2016, with the first radio program featuring Professor Amar Singh Rai, a member of the legislative assembly from Darjeeling. According to Vatican Radio news, after congratulating the principal for having the vision to bring the first community radio to the area, Professor Rai encouraged radio hosts and students to raise local issues, not only to create awareness but also to educate and enlighten.

“There is lot to be done,” said Professor Rai in his radio address, according to Vatican Radio news. “People are not aware and conscious enough about drinking water, solid and liquid waste management, harmful effects of plastic usage and the issues allaying the tea industry. The radio program is a small step for Salesian College but a giant step for the community.”

The Salesian radio station provides an opportunity for students and its listeners to tell their own stories and to share their experiences, as well as information on important topics and news affecting the local area. It also allows students to be media contributors. A team of six radio hosts will provide the 20 shows a week, which will take place seven days a week for 12 hours each day. The programs, which run from one, two and three hours, are scheduled as daily, bi-weekly and weekly shows.

The Salesian College provides 1,400 students opportunities for advanced studies and to complete their bachelors’ degrees. The college offers a variety of programs including communications, communicative English, computer science, math and statistics, travel and tourism management and more. Youth are able to gain the skills needed to be competitive in the job market.