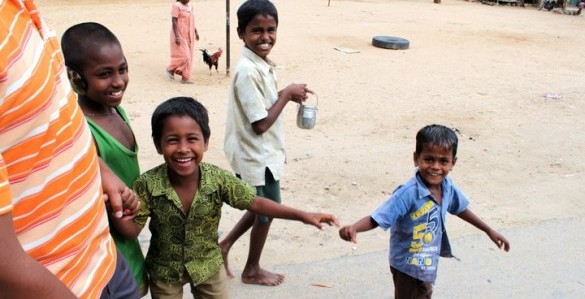 (MissionNewswire) The Child Rights Education and Action Movement (CREAM) Project was officially launched in early December at the Don Bosco Provincial House in Bangalore, India. This project aims to reach out to poor youth in both urban and rural Karnataka to create a culture that will support and uphold the protection of children’s rights.

The goal of CREAM is to encourage and enhance youth participation in the development process of promoting children’s rights and ensuring their care and protection. The project will include the formation of more than 450 child rights clubs and the training of 900 teachers and 22,500 children in Human Rights Education. It will also impart children’s rights awareness to about 75,000 children within a three-year period.

“Youth in every region and in every culture around the globe are entitled to basic human rights,” says Father Mark Hyde, executive director of Salesian Missions, the U.S. development arm of the Salesians of Don Bosco. “Through educational programming, the Salesians fight tirelessly each day to make sure the voices of marginalized youth are heard and accounted for. This program will help to enhance this work and make sure every child knows his or her human rights and is able to become a part of the development process.”

The CREAM project’s inaugural event began with an address by Sashikala Shetty, director of the Integrated Child Protection Scheme of the Government of Karnataka. She emphasized that every child by virtue of his or her birth has the right to survival, protection, development and participation, and noted that unless children are educated about their rights they will not be able to affirm those rights.

Following Mrs. Shetty’s address, Father Thomas Anchukandam, Salesian Provincial of Bangalore, spoke of the Salesians in India actively participating in the protection of children’s rights through the Young at Risk Forum and other Salesian programs and educational initiatives.

Father Joy Nedumparambil, executive director of the Bangalore Rural Educational and Development Society (BREADS), gave the keynote address and explained in detail the objectives of the project. CREAM is an initiative of BREADS and will cover 10 districts of Karnataka, namely, Bangalore, Ramnagara, Mysore, Bidar, Gulbarga, Yadgir, Chitradurga, Yadgir, Bellary, Raichur and Davangere. Other dignitaries were also on hand to celebrate the event.

The Salesians have been active for many years fighting for the rights of youth in India. For the past 22 years, the Salesians in Bangalore have focused on the rights of abandoned youth on city”s dangerous streets. With the help of many lay volunteers, the Salesian-run organization, Bangalore Oniyavra Seva Coota — locally known simply as “Bosco” — takes thousands of youth off the streets and offers them the chance of a better future.

The “Bosco” project began in 1980, when a group of Salesian students from Kristu Jyoti College in Bangalore decided to get personally involved with the abandoned children and youth in the city. They soon discovered the harsh reality experienced by the thousands of minors fighting for survival on the streets of Bangalore and started a weekly outreach project.

Today, Bosco has eight Salesian-run centers for youth, almost all in Bangalore, as well as six others in places of greatest risk. More than 100 Salesians and volunteers are involved in the centers and about 6,000 youth are rescued from the streets every year.

ANS – Bosco Project: giving life in all its fullness