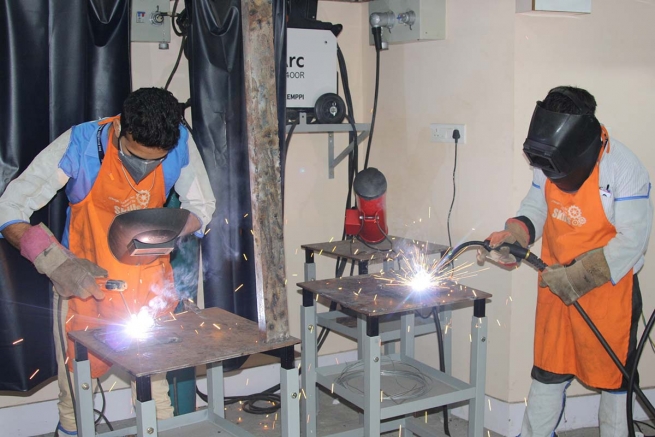 (MissionNewswire) Don Bosco Skill Mission is an advanced vocational training initiative for the southern regions of India. The goal of the initiative is to provide skills training to poor youth and connect 100 percent of graduates to employment. Salesian Father Antree Kannampuzha is currently responsible for the Salesian center located in Bangalore.

The Don Bosco Skill Mission initiative was launched in Don Bosco Tech in Bangalore. It targets students who have already completed their first year of skills training. Currently, 120 students are allowed in the program each cycle. The course is residential, lasts two months and is offered free of charge. Instructors are specialized in mechanical skills training and prepare for their role as educators through a month of teacher training and Salesian formation.

In addition to skills training, Salesian educators teach respect for ethnic and religious differences, as well as English language lessons and life skills to improve one’s character. The Salesian program also offers a guidance service that follows up with the graduates for three years following the program. The program has been successful at reaching its 100 percent employment placement rate.

“The program is working as it should because Salesian missionaries have developed agreements with several companies that offer employment to our graduates, who are training specifically according to the requirements of the company,” says Fr. Kannampuzha. “The companies sponsor the two-month training that Don Bosco Skill Mission organizes, on the condition that the young person continues to work for the company for the next 10 months. It is at the end of the 12 months that the company refunds the expenses advanced by the Salesian program. In this way, those who start the course are sure to find employment after two months, receiving a good salary compared to the current labor market in Southern India.”

Access to professional training and workforce development services is highly valued by youth in India given the current state of the country’s economy. According to the International Labor Organization’s Global Employment Trends 2015 Report, India experienced a sharp slowdown in the economy during 2012 and 2013 when growth dropped below 5 percent. The economy grew slightly faster in 2014 reaching 5.4 percent, reflecting an improvement in the growth rate of the services sector and a better monsoon season than originally anticipated. However, the unemployment rate for youth is remaining flat after having risen 3.6 percent in 2012 and again climbed in 2013 to 3.7 percent.

With more than 1.2 billion people, India has the world’s fourth largest economy and, according to UNICEF, is home to one-third of the world’s poor. Close to 217 million of India’s poor are children. Although more than 53 million people escaped poverty between 2005 and 2010, most remain vulnerable to falling back below the poverty line.