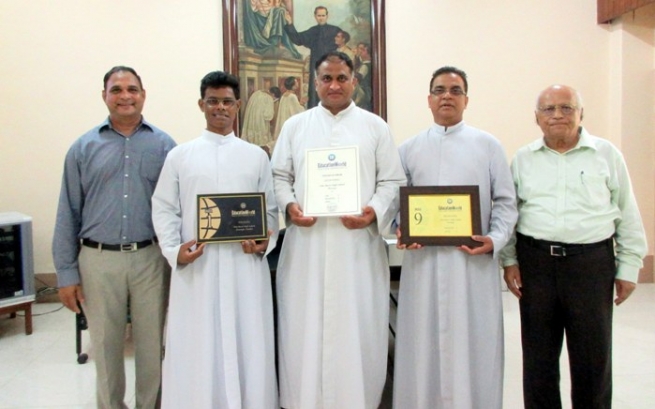 (MissionNewswire) The Don Bosco High School Matunga has been ranked first among the top five green schools in India’s Education World Grand Jury Awards 2018. Educator and school coordinator, C. Rai, represented the school at the awards ceremony that was held in September at the Leela Ambience Gurgaon Hotel & Residences in Gurgaon, New Delhi.

“There is no doubt that Don Bosco is a brand that is famous and revered in the country. We ought to be proud that we are part of this great legacy and indeed we are,” says Rai.

Don Bosco High School Matunga is a member of India’s Greenline organization which works to inform people and get them involved in environmental issues in Mumbai. The Don Bosco school takes part in all the activities conducted by Greenline in order to work towards a greener and cleaner environment and achieve the sustainable development goals proposed by the United Nations.

The school’s students have been involved in several environmental projects including developing an eco-bricks collection. Eco-bricks are plastic bottles packed with used, clean and dry plastic to achieve a building block that can be used over and over again. Students were assigned the task of making eco-bricks with bottles. They created 1,730 eco-bricks and were awarded the BOTO prize for the highest number of eco-bricks created. The eco-bricks were used to help provide proper sanitation facilities in slums.

“To be placed high up there and acknowledged as one of the premier educational institutions of the country is indeed a special and proud moment,” said Father Bernard Fernandes, Don Bosco High School principal. “However, it is a major responsibility appropriated to us to sustain the good and innovative practices that touch the lives of thousands of students that pass through the portals of this school every year.”

With more than 1.32 billion people, India’s growing population is putting a severe strain on the country’s natural resources. Don Bosco green initiatives are working to combat this crisis in India as well as across the globe. India has the world’s fourth largest economy but more than 22 percent of the country lives in poverty. About 31 percent of the world’s multidimensionally poor children live in India, according to a new report by the Oxford Poverty and Human Development Initiative. A “multidimensionally poor” child is one who lacks at least one-third of 10 indicators, grouped into three dimensions of poverty: health, education and standard of living.