INDIA: Close to 500 youth from diverse backgrounds come together for peace march 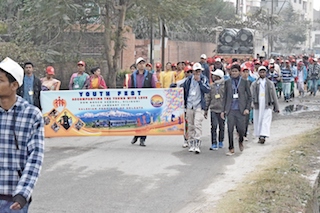 (MissionNewswire) Close to 500 youth from Salesian institutions in the Indian states of West Bengal, Sikkim, Bihar, Jharkhand, and neighboring country Nepal participated in a peace march held on Saturday, Jan. 27. The peace march was part of four-day international youth festival that highlighted the unity in diversity in spite of racial, ethnic and linguistic differences. This annual festival dates back more than 40 years in the Salesian Kolkata province.

The crowd that came together was diverse, bringing together youth who spoke six different languages including Bengali, Hindi, Santali, Sadri, Nepali and English. They showed by example that it’s possible for humanity to live in peace.

Accompanied by their teachers and mentors, including Salesian priests, brothers, sisters, teachers, alumni and other dignitaries, the youth marched in Siliguri, the second largest town of West Bengal and gateway city to Nepal, Bhutan and hill stations of Darjeeling, Mirik, Gangtok. The spread the message of peace, joy and happiness. Don Bosco School Siliguri has the theme, “Accompanying the young with love,” which was evident during the march.

“Though we are representing different regions, speaking different languages, we belong to one family, the society and the world at large,” said Salesian Brother Lawrence Mondal, the youth director of Kolkata. “The rally was indeed as a gesture to show ordinary people peace is the only desirable outcome which could intensify the love for humanity.”

The peace marchers dressed in their ethnic outfits and held placards while singing peace and harmony songs, communicating the message of peace. The colorful rally began in the later afternoon and was started with a short introductory speech given by the vice principal of the host school Fr. Dilip Mondal. Principal of Don Bosco Siliguri Father V. T. Jose recalled the genesis of youth fest saying, “A group of Salesian brothers from Salesian College Sonada Darjeeling came down to Don Bosco School Park Circus Calcutta and organized the first youth fest in 1978.”

Salesian missionaries are making a huge difference in India through education and social development programs, but the need is enormous. The country is home to 25 percent of the world’s hungry poor, 44 percent of the workforce is illiterate and more than 220,000 children have been affected by the AIDS epidemic. Progress has been significant: the number of out-of-school children has been reduced from 25 million to 8 million in the past eight years, and more than 85 percent of the population has access to sustainable clean drinking water.

Child labor continues to be a serious issue in the country with approximately 10.1 million children in the workforce, according to UNICEF. An estimated 11 million children live on the streets facing the daily horrors of rampant exploitation, forced labor, widespread substance abuse and physical violence. For many, it is difficult to imagine a better life.