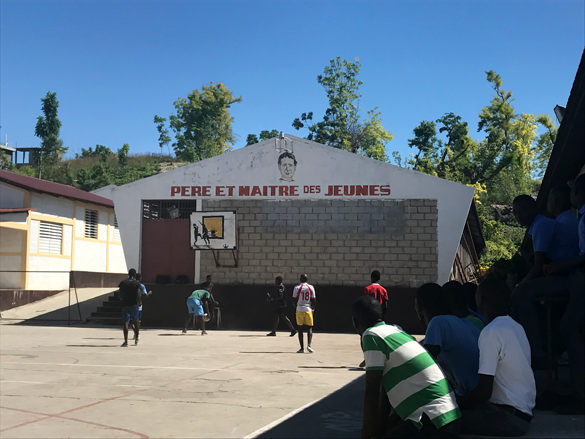 (MissionNewswire) Salesian missionaries are rebuilding after Hurricane Matthew, a Category 4 hurricane, pummeled Haiti on Oct. 4, 2016, affecting 2.1 million people including close to 894,000 children. The hurricane caused close to 1,000 deaths and has left nearly 141,000 people still displaced, most of whom are living in temporary shelters. Missionaries living and working among the people who have been affected report that nearly 800,000 people are in need of food assistance.

Salesian missionaries arrived in Haiti in 1935 upon request from the Haitian government to run a professional school. There are more than 200 Salesian-run schools in Haiti. Salesian programs are located throughout Haiti, including Port-au-Prince, Fort-Liberté, Cap-Haïtien, Les Cayes and Gressier. Salesian missionaries operate 10 main centers across the country, each of which has a number of primary and secondary schools, vocational training centers and other programs for street children and youth in need.

With an established presence throughout the country, the emergency response to the hurricane was efficient and comprehensive. The Salesian Vocational Training Center in Les Cayes, which did not suffer significant damage, became the logistics base for initial aid including distributing food to about 900 families, activities for youth, a place to recharge phones (thanks to a generator), and a place where people could seek shelter and access clean water.

The Salesian-run Rinaldi Foundation of Haiti, which headed up the Salesian response to the hurricane, is also leading the rebuilding efforts. Salesian missionaries report that the current needs in Haiti include rebuilding housing, hospitals, schools and secondary roads. In addition, the Haitian people need restoration of agriculture, livestock and fisheries, access to food, clean water and electricity, and education.

The Don Bosco Missions Association in Turin, Italy is also supporting the work of Salesian missionaries in Haiti. In collaboration with the International Volunteers for Development, it has undertaken repairs to houses in a way that reduces the vulnerability to environmental disasters. The rebuilding project will supply materials needed for repairs and technical support to ensure sound construction practices for safe housing units.

Training and technical supervision by the staff of the Rinaldi Foundation and the vocational school teachers will also provide assistance during rehabilitation. The project includes the rehabilitation of 158 homes in the Bergeau district of Les Cayes and Camp-Perrin in the South Department of Haiti and will ensure that about 790 people will have a home again.

“Living and working within the communities they serve, Salesian missionaries are perfectly positioned to immediately assess the needs of those who have been affected by these natural disasters,” says Father Mark Hyde, executive director of Salesian Missions, the U.S. development arm of the Salesians of Don Bosco. “Because these communities are home to Salesian missionaries, they also remain long after others have left. They are there for the long haul, rebuilding people’s homes, entire communities and people’s livelihoods.”

Missionaries are also planning to start distributing seeds and agricultural tools to those who lost their crops and with them their livelihood. About 500 farmers will benefit from this project, which will also allow the resumption of economic activities in selected areas. With an eye on long-term sustainability and ensuring reconstruction efforts in local communities, the Rinaldi Foundation is also planning an education project that will provide intensive training for 300 youth in the construction industry, including courses in metallurgy, carpentry and welding. Students who might not otherwise be able to continue their studies will  be able to access scholarships.

Haiti’s educational system is continuing to rebuild after the 2010 earthquake destroyed 90 percent of schools and 60 percent of hospitals, killed thousands of people and left more than 350,000 injured. Despite ongoing reconstruction and infrastructure improvements, Haiti remains the poorest country in the Americas and one of the poorest in the world. According to the World Bank, over half of the country’s population of 10 million lives on less than $1 per day and approximately 80 percent live on less than $2 per day. The majority of Haitians lack adequate access to education, healthcare and nutritious food.