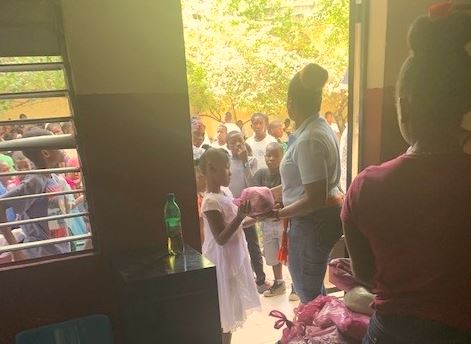 (MissionNewswire) Students attending the Salesian-run Timkatec schools in Pétion-Ville, Haiti, had access to better nutrition thanks to a partnership between Salesian Missions, the U.S. development arm of the Salesians of Don Bosco, and Rise Against Hunger, an international relief organization that provides food and life-changing aid to the world’s most vulnerable. The shipment provided rice-meals from December 2021 to January 2022.

The rice-meals were distributed at the school canteen and sent home with students in need. A Salesian reported, “Since the canteen was suspended for the months of November to December for lack of rice, we decided to make a first distribution of dry rice to take away on the occasion of the Feast of the Immaculate Conception, Dec. 7. The rice was distributed after mass in the courtyard of the Professional School: Timkatec 2.”

The Timkatec school has existed since 1994 and was founded for former street children. Later, it was expanded to include local disadvantaged children who had not had the chance to attend school until ages 8-10. The vocational schools were added later so youth could learn a trade for employment. Additional rice-meals were distributed at the canteens in the three Timkatec schools and provided to students to take home during times of school closure.

Father Gus Baek, director of Salesian Missions, said, “Salesian feeding programs not only help with a balanced diet, but they also allow students to focus on getting an education without worrying about where they will find their next meal. Hungry students have a harder time focusing on their education.”