HAITI: Salesian Missions and SoapBox Soaps Partnership Puts Soap into the Hands of Youth and Families at Risk for Cholera 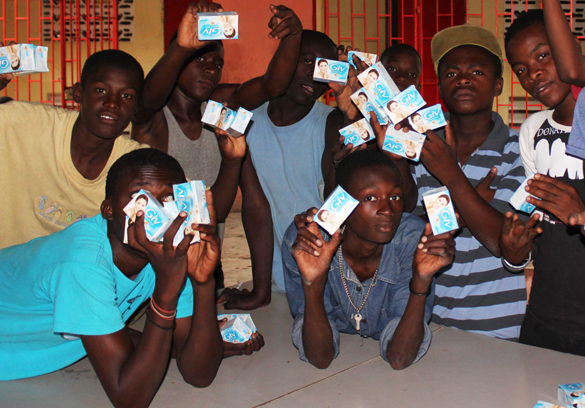 (MissionNewswire) Thanks to a recent donation from SoapBox Soaps, coordinated by Salesian Missions, more than 10,000 bars of soap will make their way into the hands of children and families in need in Haiti. The spread of cholera in the country in the years following a massive earthquake has added to the devastation.

Partnerships like this are vital in the effort to reduce the spread of disease in Haiti and around the globe. Oct. 15 of each year marks Global Handwashing Day, which seeks to raise awareness about this important issue. According to the Global Public-Private Partnership for Handwashing, washing with soap is the most effective and inexpensive way to prevent diarrheal and acute respiratory infections, which take the lives of millions of children in developing countries.

Working together, SoapBox Soaps and Salesian Missions are making an impact. Connecting supplies with programs on the ground—and ensuring their delivery and distribution in addition to measuring impact—is a key strength of Salesian Missions. The U.S. development arm is connected to an international network of Salesian missionaries, making it a valuable partner to companies and nonprofits that provide in-kind aid.

“Salesians are on the ground in Haiti working with children in need, so we were able to provide a pathway to bring the soap from the donors directly to the beneficiaries,” says Jessica O’Connor, property and logistics officer at Salesian Missions, the international development arm of the Salesians of Don Bosco. “Soapbox Soaps ensured the effectiveness of their donation by working with us to determine all the details of pricing and distribution beforehand.”

As a result of the donation, more than 140 boxes of soap—which will be used for personal hygiene—were provided to Salesian-run centers in Haiti. Salesians have been working in Haiti for many years and are positioned to enable organizations like SoapBox Soaps to reach people in need efficiently, even if the organization does not have an existing presence in the country.

Salesian Missions worked directly with the Salesian-run Rinaldi Foundation in Haiti to determine the brand, price and quantity of soap needed. Then, Salesian Missions made the request to Soapbox Soaps and coordinated the delivery to and distribution from Salesian centers in the country.

The World Health Organization estimates that close to two million people, mostly children under the age of five, die each year from hygiene and sanitation related illnesses. Most are from populations in developing countries who live in extreme poverty.

Since 2010, Haiti has experienced a deadly cholera outbreak and according to the United Nations, the country still hosts the largest number of suspected cholera cases worldwide with 698,893 cases and 8,540 deaths reported from October 2010 to the present. It is widely accepted that having access to clean water and soap is one of the best preventive measures.

“This donation is so vital to our programs in Haiti because it provides Salesian schools and homes for street children the ability to promote clean habits among the students and prevent the spread of disease in the institutions and local communities,” adds O’Connor. “By promoting the practices of washing and cleanliness, the Salesians not only teach students to care for their health and bodies, but also to respect themselves and have personal dignity.”

The donated soap is providing life-saving hygiene to several different Salesian-run sites in Haiti including the Lakay Center for Street Children, a school that brings youth in off the streets and offers them food, clothing, shelter and an education. Salesian institutions like Lakay then work to reintegrate youth back into society through a variety of education and workforce development initiatives.

“We started SoapBox to support amazing organizations like Salesian Missions,” says David Simnick, CEO of SoapBox Soaps,”Our whole mission is to empower customers with the ability to make the world a better place through everyday quality purchases.”

ABOUT SALESIAN MISSIONS WORK IN HAITI

Salesian Missions is the U.S. development arm of the Salesians of Don Bosco, which has been serving Haiti for more than 75 years. Salesian Missions was instrumental in emergency response and relief efforts in the aftermath of the devastating earthquake that struck Haiti on Jan. 12, 2010. Salesians in the country were among the first responders—providing shelter and medical aid; means to securely transport, store and distribute relief supplies and clean drinking water; and, perhaps most importantly, an understanding of how to get things done in Haiti. Salesian work rebuilding as well as providing education and training continues in Haiti to this day.

Salesians in Haiti run elementary schools, secondary schools, vocational training institutes and colleges across the country. In addition, they provide shelter for homeless youth and programs for street children. Haiti is one of more than 130 countries around the globe where Salesians operate such programs. For more information, go to SalesianMissions.org.

SoapBox Soaps  was founded in 2010 with a simple mission: to empower consumers to change the world through everyday, quality purchases. For every unit sold, the company gives to clean water, health, and hygiene initiatives in communities at home and around the globe.

All SoapBox products are vegan, gluten-free, and free of any parabens, petrochemicals, phthalates, SLS, and palm oil. SoapBox Soaps are all made in the USA, with 100% recyclable packaging. They are sold at Target, Whole Foods, Fresh Market, Harris Teeter and thousands of other retailers across the nation. for more information, go to www.SoapBoxSoaps.com.