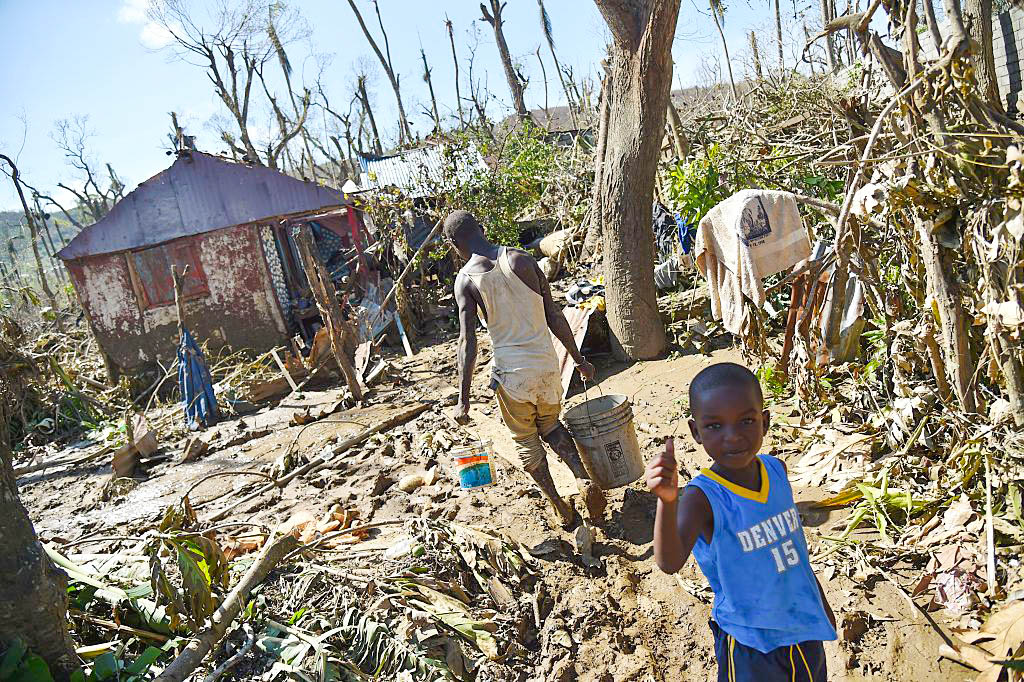 (MissionNewswire) Salesian missionaries are assessing damage to their own educational centers as they continue to respond with emergency aid and relief work for those affected by Hurricane Matthew, a Category 4 hurricane that pummeled Haiti on Oct. 4. Salesian programs have been hit hard in Les Cayes, but Father Jean Paul Mesidor, superior of the Salesian work in Haiti, has recently released a video confirming that the work of local Salesian missionaries in the country will continue unabated. He also expressed his gratitude for all those donating and supporting their ongoing relief work in the country.

“We cannot yet quantify our losses,” he said. “We want to thank everyone from around the world who has called or written to express their sympathy.” 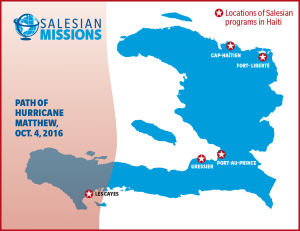 Soon after the hurricane hit Haiti, Salesian Missions, the U.S. development arm of the Salesians of Don Bosco, launched an emergency fundraising campaign to purchase relief supplies and help missionaries on the ground provide assistance. Those who want to help are encouraged to donate online at https://www.salesianmissions.org/haiti-relief/give. Donations made through this page will go specifically for relief efforts in Haiti.

“What is most needed at times like this are cash donations,” explains Father Mark Hyde, executive director of Salesian Missions. “What aid workers and our Salesian missionaries on the ground need most are relief supplies, and the fastest way to make sure they get what they need is to donate money to organizations, like Salesian Missions, who already have people in the affected areas. We have missionaries, schools and programs helping the poor in cities and towns not only throughout Haiti, but also in the Dominican Republic, so this adds to our ability to coordinate response efforts.”

The UN is reporting that an estimated 1,000 people have died in Haiti due to the hurricane and estimates that some 1.4 million people are in need of immediate assistance. Salesian missionaries living and working in the area responded immediately to the crisis and are reporting that the southern part of the country, which consists of three departments, are completely isolated from the rest of the Haiti because the bridge linking to Port-au-Prince, the country’s capital, has been destroyed.

In addition, farm lands and fruit trees which residents depend on for food in the region, once rich with vegetation and ready for the harvest, have been completely destroyed increasing the need for food aid and exacerbating ongoing food insecurity in the country. Because of the heavy rains and a lack of access to clean, safe water for drinking, there is also concern of a cholera outbreak. Cholera cases have been steadily rising in the country through 2016 and the concern is with floodwaters and overflowing rivers the conditions are ripe for an outbreak of this water-borne disease. Salesians report that to combat a potential outbreak the first truck with tablets for water treatment and water tanks arrived in Les Cayes on Oct 6, and currently six water trucks are on their way to Les Cayes and Jeremie. A water tank has also been made available to the hospital in Les Cayes.

Some schools in Haiti reopened on Monday, Oct. 10. But, according to UNICEF, some 100,000 children will be missing out on learning after their schools were either damaged or converted into shelters. National estimates note that at least 300 public schools have been partially or entirely damaged in the country and many others are being used to shelter displaced families.

Funds raised through the Salesian Missions emergency appeal will purchase the following relief supplies which have been identified as a priority by aid workers on the ground in Haiti: water, food (rice, beans, oil), sheet metal and plywood. The goal is to begin offering a hot meal to 3,000 children a day as soon as possible. The Sandals Foundation has already pledged $10,000 for this initial emergency effort.

After the January 2010 earthquake, Salesian Missions in New York worked in cooperation with the Rinaldi Foundation, which headed up Salesian relief and reconstruction efforts in Haiti. The experience both the Rinaldi Foundation and Salesian Missions gained from this work is invaluable at times like this. Not only are Salesian missionaries often called upon by the government to assist, their programs are trusted by locals who know it is a place to turn during emergencies. Infrastructure and logistical capabilities (such as storage warehouses, transportation and distribution channels) allow Salesian Missions to provide assistance during times like this. Additionally, partnerships are key to effectively respond to humanitarian needs during emergencies such as this. Salesian Missions works with organizations within Haiti, in the United States and around the globe, and therefore has access to the supplies needed.

Salesian missionaries arrived in Haiti in 1935 upon request from the Haitian government to run a professional school. There are more than 200 Salesian-run schools in Haiti and programs reach more than 25,000 children and youth. Salesian programs are located throughout Haiti, including Port-au-Prince, Fort-Liberté, Cap-Haïtien, Les Cayes and Gressier. Salesian missionaries operate 10 main centers across the country, each of which has a number of primary and secondary schools, vocational training centers and other programs for street children and youth in need. Programs are focused on assisting the poorest and most vulnerable children (and their families) in countrysides, cities and slums. These include feeding programs and vocational and technical education to prepare youth for the workforce. Nutritional meals are a key element of the schools, ensuring children not only attend school but also are able to have the energy and focus to learn. In Port-au-Prince, Salesian missionaries operate one the largest free cafeterias in the world feeding more than 25,000 people daily.

Haiti’s educational system is continuing to rebuild after the 2010 earthquake destroyed 90 percent of schools and 60 percent of hospitals, killed thousands of people and left more than 350,000 injured. Despite ongoing reconstruction and infrastructure improvements, Haiti remains the poorest country in the Americas and one of the poorest in the world. According to the World Bank, over half of the country’s population of 10 million lives on less than $1 per day and approximately 80 percent live on less than $2 per day. The majority of Haitians lack adequate access to education, healthcare and nutritious food.

Salesian Missions is the U.S. development arm of the Salesians of Don Bosco, working to raise funds and develop programs to aid youth and families in some of the poorest places on earth. Haiti is one of more than 130 countries around the globe where Salesians work to give hope and provide opportunity to vulnerable youth through education and skills training. Learn more about where the Salesians work and the programs they provide at www.salesianmissions.org.

ANS – Haiti – Hurricane Matthew: “As Salesians we must be where there are thousands of young people in need”

UNICEF – One week after Hurricane Matthew, at least 300 schools damaged in Haiti, over 100,000 children miss out on learning