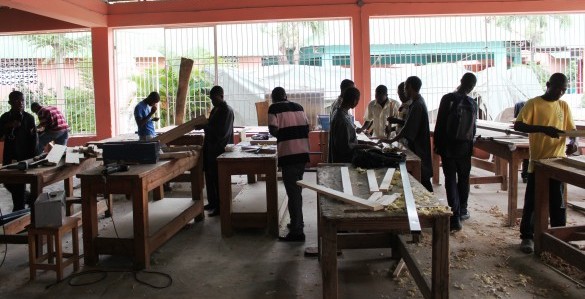 (MissionNewswire) Signs of progress continue in Haiti. Thanks to assistance from the Canadian Institute of Steel Construction (CISC) and Atlas Tube, Lainco, Fast + Epp, Canam and ArcelorMittal et Cast Connex, the Salesian-run L’École Lakay Trade School in Haiti is being rebuilt. The school suffered major damage in Haiti’s January 2010 earthquake and was forced to close.

Lakay is a Salesian-run trade school that teaches street youth carpentry, cabinetry, electrical and tailoring skills. The new building will feature 16 classrooms, workshops, washrooms, offices, storage areas, covered walkways and a shaded outdoor space. The cost to rebuild Lakay is projected to be $1.2 million with a targeted completion date in the beginning of 2013.

Student enrollment has increased significantly since last year and the new building will be able to accommodate 200 students. The school fulfills an important socio-economic mission by teaching underprivileged and street youth skilled trades to help them escape poverty and establish a sustainable livelihood.

“Programs at Lakay provide an important role in communities in Haiti,” says Father Mark Hyde, executive director of Salesian Missions – the U.S. arm of Salesians of Don Bosco. “Youth are able to learn a trade, find a path out of poverty and give back directly to the communities they are from.”

ABOUT SALESIAN MISSIONS IN HAITI:

Salesian Missions, headquartered in New Rochelle, NY, is the U.S. development arm of the Salesians of Don Bosco. The Salesian Missions Office for International Programs was assigned the task of coordinating international Salesian relief efforts in Haiti immediately after the January 2010 earthquake. The Salesians have served Haiti for 75 years, operating schools, feeding programs, orphanages, and youth programs and building educational infrastructure. For more information, including a 2-Year Progress Report, go to www.SalesianMissions.org.