HAITI: More than 700 Students Have Access to School and Bedroom Furniture Thanks to Salesian Missions Partnership with Asset 360 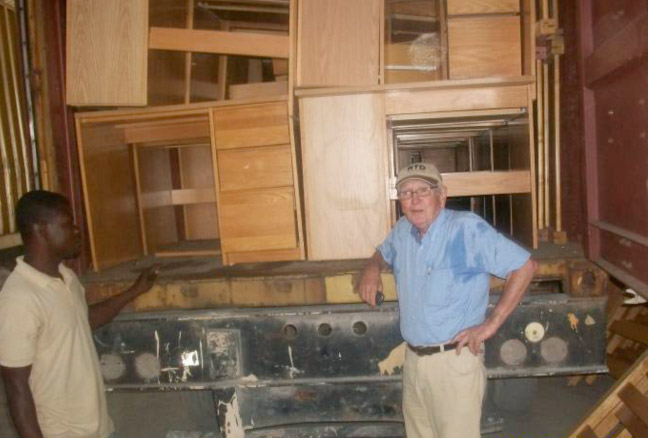 (MissionNewswire) Thanks to a recent donation from Asset 360, coordinated by Salesian Missions, more than 700 students attending Salesian programs in Haiti have new school and bedroom furniture. Asset 360 is an environmental services company specializing in the responsible repurposing of surplus materials from a wide variety of clients. Their extensive network of humanitarian relief organizations provide relief supplies to needy communities in the United States and in the developing world.

The donated furniture from Asset 360 is being shared by Salesian programs across Haiti. Salesian-run educational institutions in Port-au-Prince, the country’s capital city, bring homeless children in off the streets and provide them with food, clothing, shelter and education. These schools then work to reintegrate youth back into society through a variety of small economic initiatives.

In addition to schools, there are Salesian-run technical and vocational training centers throughout the country. Those in Port-au-Prince and its surrounding villages offer courses in a variety of professional fields such as catering, woodworking, agriculture and hotel management. Additional centers in the cities of Fort Liberté and Cap-Haitien specialize in the fields of health, agriculture, information technology, electricity and hotel management. All of these centers, as well as other Salesian-run programs in the country, focus on providing youth with the educational opportunities and social support they need to succeed.

“Salesians in Haiti are focused on providing education and technical training to help break the cycle of poverty and bring hope to the Haitian people,” says Father Mark Hyde, executive director of Salesian Missions, the U.S. development arm of the Salesians of Don Bosco. “Partnerships like those with Asset 360 help us to provide much needed supplies for our programs. Students find it easier to concentrate on their studies in a structured environment and the donated desks and chairs make that possible.”

Bedroom furniture such as beds and dressers were donated to Salesian students. The new furniture has given many a sense of dignity, especially those who have never had their own bed or dresser before.

“This is like a dream for me because where I was on the street before I never thought that one day I would have a bed for myself like rich people,” says a young student at the Salesian-run Lakay shelter and educational program in Port-au-Prince.

The shipment of furniture was the first of several donations provided by Asset 360 and coordinated by Salesian Missions. Salesian programs in Guatemala, Honduras and El Salvador will also receive shipments of donated furniture.

“This was a unique project at Bowling Green State University, in that multiple facilities were involved in the removal project on campus and multiple destinations were targeted for the shipments through Salesian Missions,” says Mark Berry, president of Asset 360. “Coordinating all of these moving parts was the challenge that we faced, and the campus community at BGSU could not have been more satisfied with the outcome.”

Despite ongoing reconstruction and infrastructure improvements that are helping to rebuild Haiti since the January 2010 earthquake that devastated the country, Haiti remains the poorest country in the Americas and one of the poorest in the world. Over half of its population of 10 million lives on less than $1 per day, and approximately 80 percent live on less than $2 per day, according to the World Bank. Haiti continues to have significant needs in education, healthcare and nutrition.

Last year, more than 3 million Haitian children returned to school with 20,000 of them educated in Salesian-run institutions. The country’s educational system is continuing to rebuild after the earthquake destroyed 90 percent of schools and 60 percent of hospitals, killed thousands of people and left more than 350,000 injured.

For Salesian missionaries in the country, schools in Haiti fulfill an important socio-economic mission by providing a foundation of lifelong education for poor youth and teaching them valuable skills and trades to help them escape poverty and establish a sustainable livelihood.

ASSET 360 is an environmental services company specializing in the responsible repurposing of no longer needed surplus materials from a wide variety of clients. Any private organization or public institution generating surplus furniture, fixtures, equipment and supplies is paired with Asset 360’s extensive network of humanitarian relief organizations whose mission it is to provide relief supplies to needy communities here in the U.S. and in the developing world.

Asset 360 staff have shipped more than 3,000 shipping containers to over 40 countries, accounting for more than 45 million pounds of materials diverted away from already over-burdened landfills. Asset 360 clients realize significant financial, social and environmental benefits through the use of this surplus reuse program.

Salesian Missions is headquartered in New Rochelle, NY, and is part of the Don Bosco Network—a worldwide federation of Salesian NGOs. The mission of the U.S.-based nonprofit Catholic organization is to raise funds for international programs that serve youth and families in some of the poorest places on the planet. The nearly 30,000 Salesian missionaries are made up of priests, brothers and sisters—all dedicated to caring for poor children around the globe in more than 130 countries. The Salesians are widely considered the world’s largest private provider of vocational and technical training. Additionally, more than 1 million children attend Salesian primary schools, many of which are UNICEF-supported. Millions of vulnerable youth have received services specifically funded by Salesian Missions. These services and programs are provided to children regardless of race or religion.