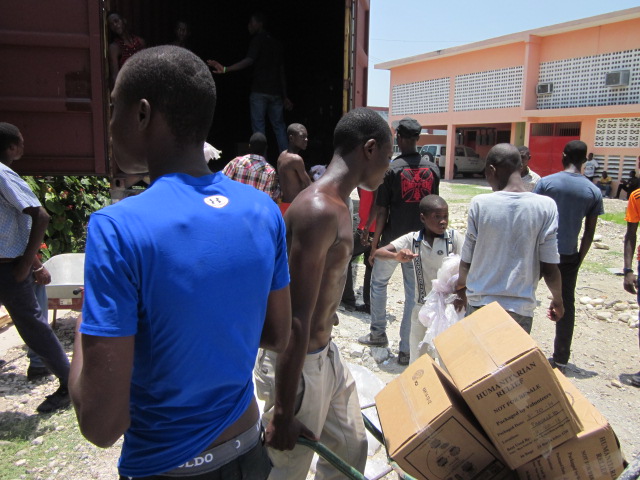 (MissionNewswire) Close to 1,000 vulnerable youth and their families who attend Salesian-run centers in Haiti have access to better nutrition thanks to a recent donation of fortified rice-meals. The donation was made possible through an ongoing partnership between Salesian Missions and Stop Hunger Now, an international relief organization that provides food and life‐saving aid to the world’s most vulnerable.

Despite ongoing reconstruction and infrastructure improvements that are helping to rebuild Haiti after the January 2010 earthquake that devastated the country, Haiti remains the poorest country in the Americas and one of the poorest in the world. According to the World Bank, over half of the country’s population of 10 million lives on less than $1 per day and approximately 80 percent live on less than $2 per day. The majority of Haitians lack adequate access to education, healthcare and nutritious food.

In 2012, more than 3 million Haitian children returned to school with 20,000 of them educated in Salesian-run institutions. The country’s educational system is continuing to rebuild after the earthquake destroyed 90 percent of schools and 60 percent of hospitals, killed thousands of people and left more than 350,000 injured.

For Salesians in the country, schools in Haiti fulfill an important socio-economic mission by providing poor youth a foundation for lifelong learning through education and training in skills and trades to help them escape poverty and establish a sustainable livelihood.

The donated meals from Stop Hunger Now are helping to enhance the educational environment for poor youth at three Salesian centers in Haiti. Students in elementary, technical and vocational schools in Lakay, Lakou and Cap-Haïtien were among the recipients as well as many others from surrounding communities.

“The shipment of packaged meals helps us to improve the nutrition of orphans and other vulnerable children,” explains Jessica O’Connor, property and logistics officer at the Salesian Missions Office for International Programs. “Operating feeding programs for youth in Salesian schools whose families cannot afford to feed them is very important and integral to the success of our students and their ability to gain an education.”

The meals are provided to students during the school day as well as to their families at a monthly meeting. This food aid serves as an incentive for families to send their children to school and as a result of the donation, students are thriving. Many have gained weight, suffer fewer illnesses and are more focused on their studies. Teachers are seeing better student performance in class as well as less conflict among students.

“The partnership with Stop Hunger Now allows Salesian Missions to expand its scope of services to youth in need,” adds O’Connor. “Stop Hunger Now is one of our favorite partners to work with because they are very flexible. They actively seek out opportunities to enhance shipments with additional donated items that the beneficiaries need, and they go the extra mile to help Salesian Missions meet any additional emergency requests for food that it receives.”