(MissionNewswire) Worldwide, an additional 6.7 million children under the age of 5 could suffer from a severe malnutrition known as “wasting” before the end of 2020, said humanitarian leaders who analyzed the COVID-19 crisis and its risks to childhood malnutrition. The report and statistics were recently published in The Lancet.

Wasting is a life-threatening form of malnutrition, which makes children too thin and weak, and puts them at greater risk of dying, poor growth, development and learning. In response to the report, UNICEF warned that an additional 10,000 child deaths per month this year could result from this increase in malnutrition.

All forms of malnutrition—as well as food insecurity and extreme poverty—are expected to increase significantly due to the pandemic, greatly affecting people who are already struggling.

“The number of people in low-income or middle-income countries (LMICs) facing acute food insecurity will nearly double to 265 million by the end of 2020,” said the report based on data from the United Nations World Food Program. 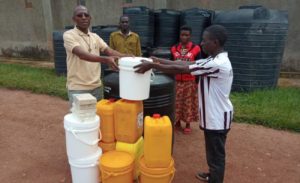 Salesian Missions, the U.S. development arm of the Salesians of Don Bosco, joins these humanitarian organizations in the fight against severe hunger and malnutrition. Salesian Missions recently announced the funding of nutrition and prevention projects in Burundi, India, Peru, Sri Lanka, South Africa, Togo and Uruguay.

“We have funded projects in seven countries to date that address nutritional support, sanitary and hygiene, and educational materials for prevention. These activities help respond to the local need and help families who have been pushed even further into poverty,” said Father Gus Baek, director of Salesian Missions.

Salesian missionaries around the globe who live and work in the communities they serve are also mobilizing with new projects. The efforts of the “Save and Sustain” Don Bosco Network India-COVID-19 relief program has helped prevent the starvation of nearly 1.4 million vulnerable people.

Through emergency funding from Salesian Missions, the Salesians of Don Bosco at Don Bosco Gumbo-Juba, South Sudan, are able to provide daily meals for internally displaced children, food rations for highly vulnerable people and hand-washing facilities at the camp. 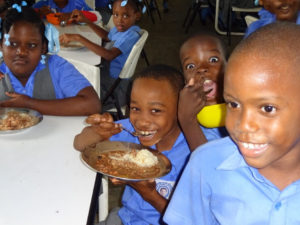 Salesian Missions launched its “Hunger for Education” project in Haiti, which was funded by USAID.

The Hunger for Education project in Haiti, funded by the U.S. Agency for International Development (USAID) from September 2016 to March 2019, implemented school feeding programs in Salesian centers across the country. The project provided lunch five days a week for 12,746 students at six school centers from January 2017 to Oct. 31, 2017, 15,541 students from November 2017 to September 2018, and 18,161 students from November 2017 through the end of the project on March 31, 2019.

The project helped support the shipment of 40 40-foot shipping containers of meals—16 from Breedlove, a nonprofit organization dedicated to helping eradicate world hunger; 17 from Rise Against Hunger, an international relief organization that provides food and life-changing aid to the world’s most vulnerable; and seven from Feed My Starving Children, a nonprofit Christian organization committed to “feeding God’s children hungry in body and spirit.”

Salesian Missions also has ongoing partnerships with Rise Against Hunger and Feed My Starving children to provide rice-meals to poor students, youth in vocational centers, former street youth in Salesian reception centers and other marginalized youth.

For example, in Zambia, more than 2,900 people, including youth, families, grandmothers and orphaned children, received better nutrition thanks to a partnership between Salesian Missions and Feed My Starving Children. Three shipments of 40-foot containers of rice-meals were delivered in 2019 to the City of Hope in Lusaka, Zambia.

For some students, the meals they receive at the City of Hope centers are the only meals they have each day. Provided to students during the school day, the food aid serves as an incentive for families to send their children to school. As a result of the donation, students are thriving. Many have gained weight, suffer fewer illnesses and are more focused on their studies.

The Lancet: Impacts of COVID-19 on childhood malnutrition and nutrition-related mortality